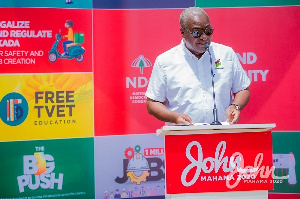 The candidate for the National Democratic Congress (NDC) who is on a tour of the Upper East region stated that it is only under NDC governments that the various districts in the region see development.

He said it was obvious who the residents will choose as a president because everything in the region from schools to water to roads, to hospitals and electricity, “we have got as a result of the NDC”.

Mr Mahama admonished the people to bring back the NDC because anytime the NPP is in office, the residents don’t see any form of development.

He said the NDC was embarking on an electrification project in the region when it was in power but these projects have been abandoned by the NPP.

He assured the people that the NDC will complete all the abandoned projects when it comes in 2021.

He also claimed the NDC was building the Tamni irrigation dam which was to irrigate 3000 hectares of land but the NPP abandoned it and rather wasting resources “to dig one village one pond”.

To him, residents are looking for viable dams that provide water throughout the year so they can engage in dry season irrigation

Amewu has kept our lights on, vote for him – Akufo-Addo