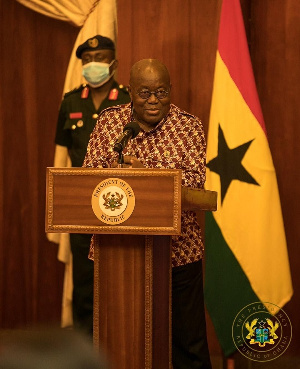 Running mate of the Progressive People’s Party (PPP), Kofi Asamoah-Siaw, has warned Ghanaians not to retain President Akufo-Addo because he is not only swimming in corruption but has benefitted from the canker.

Speaking exclusively on Frontline on Rainbow Radio 87.5Fm, the running mate said he agrees with the assertion by former President John Dramani Mahama that the President is swimming in corruption with his family, friends, and cronies.

Mr Asamoah-Siaw was worried that the President, his family and friends have taken charge of every aspect of the nation and has attempted to rob the nation through the Agyapa Royalties deal but were exposed by former Special Prosecutor Martin Amidu, who they later frustrated to resign.

According to him, President Akufo-Addo and his appointees will sell the Jubilee House should they win the 2020 elections.

For this reason, Ghanaians must reject the President who campaigned and won the corruption tag against Mr Mahama but has failed in fighting the canker because he has benefitted from the scandals under his watch.

Mr Asamoah-Siaw said the government engaged in “conflict of interest, bid-rigging, and violation of procurement rules just to transfer our mineral royalties into private hands for their selfish interest.”

He stressed that the President is now corrupt.

“He has supervised corruption, he has benefitted from corruption and does not deserve a second term. He has failed Ghanaians and must be shown the way out,” he added.

Truck loaded with stones run into 15 shops at Awutu Breku