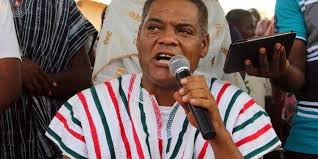 The Flagbearer of the Convention People’s Party, CPP, Ivor Kobina Greenstreet on Monday took his “electric shock” campaign tour to parts of the Eastern Region.

Flagbearer asked voters to vote massively for the CPP on December 7, 2020, to give the NDC and NPP an “electric shock”.

At Nkawkaw, the Flagbearer introduced the CPP’s Parliamentary candidate Mark Osei Yeboah to the electorates and urged them to vote for him to champion major developments that will improve their living conditions.

He said the Convention People’s Party is a party for Kwahus, therefore, called on all to return to their mother party and vote massively for the CPP come December 7.

The CPP Flagbearer earlier in the day visited the defunct Ghana Match factory at Akyem Kade as part of his campaign.

The collapsed Match factory was built by Osagyefo Dr Kwame Nkrumah to leverage on the timber resources of the area to produce matches.

The factory generated a dividend of one hundred and seventy-three thousand US dollars, 50 cents for the government in the year 1971 to 1973.

Export splint from foreign exchange was about twenty-eight thousand US dollars.

Addressing the media, the CPP Flagbearer listed dozens of state factories and enterprises built by Osagyefo Dr Kwame Nkrumah across the country but are now defunct stating that future CPP government will bring back the factories to life.

The youth in Kade appealed to the government to revive the match factory to provide job opportunities for the many unemployed youths in the area.