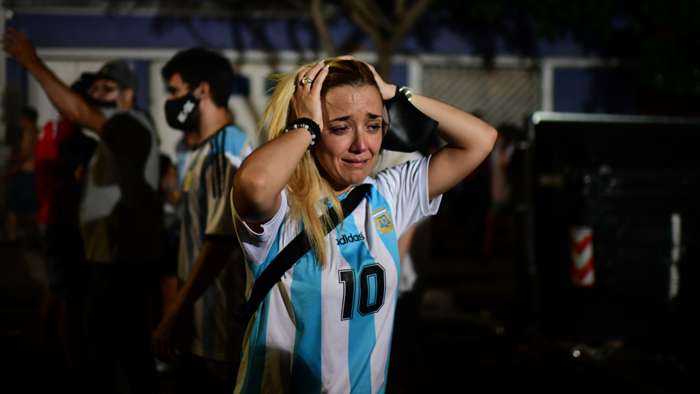 The late World Cup hero was the most Argentine of icons to his adoring fans, as much because of his failings as his unique talents on the pitch

Buenos Aires’ imposing Obelisco, the monument built in 1936 to commemorate the city’s 400th anniversary, has long served as the gathering point for Argentines to celebrate.

It was there, on June 29, 1986, that hundreds of thousands of ecstatic fans flocked to mark the nation’s World Cup final victory over West Germany, masterminded by one Diego Armando Maradona.

It was fitting, then, that the Obelisco was one of the places chosen to commemorate the life of a man who touched Argentine hearts perhaps more than any other individual in recent memory.

Despite the difficulties that coronavirus and lockdown measures continue to impose on public events, thousands knew instinctively once the news broke that Diego Maradona had passed away aged 60 on Wednesday that they had to make their way to the centre of Buenos Aires.

Others paid tribute at the steps of the Bombonera, Boca Juniors’ iconic home where Maradona had once starred and now has become a shrine to ‘God’, (the club’s Libertadores match against Internacional was postponed in respect to the late legend), while others made their way to the place where it all began, Argentinos Juniors’ stadium in La Paternal which saw Diego take his first steps in professional football and which, in 2004, took the name of its favourite son.

Many more in the coming days will file past the late legend as he lies in state at the Casa Rosada, the Argentine seat of government, from where President Alberto Fernandez – an Argentinos Juniors fan himself – delivered a poignant tribute to his idol shortly after the tragic news broke, and decreed 72 hours of national mourning.

Wherever these impromptu remembrance ceremonies take place, though, one golden rule seemed to hold: this is a time for sadness, but also for celebration, as a nation comes together to remember its rebellious, wayward yet fiercely proud and patriotic standard-bearer for the great footballer and larger than life figure that he was.