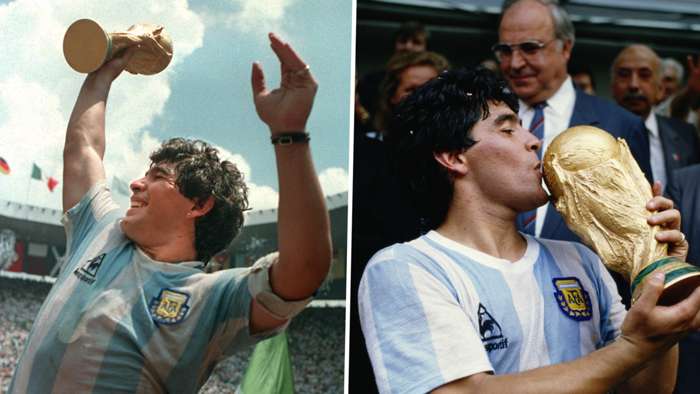 The Albiceleste, Napoli and Argentinos idol passed away at his home in Tigre after suffering a heart attack on Wednesday morning.

No matter how many times you repeat those words, in your head, in writing, or breaking the news verbally, they still ring false.

How could Diego, El Pibe de Oro, the inspiration for millions of budding footballers in every corner of the globe, simply depart this world?

Sure, he had had his close shaves, self-inflicted and otherwise, but he always came out the other side, as brash and outspoken as ever.

But not this time. Diego Maradona has died. And the world of football will be forever poorer for his absence.

Wednesday’s confirmation of his passing, after the Argentina idol had suffered a heart attack at his abode in the Buenos Aires suburb of Tigre, provoked instant grief not just in his home nation but across the globe.

“He only gave us Argentines joy,” President Alberto Fernandez stated as he decreed three days of national mourning, an honour previously afforded to just a handful of figures in the country’s history, including late head of state Juan Domingo Peron and wife Evita.

“Maradona is Argentina, I highly doubt that the world will ever see another Maradona.”

Like Peron and Evita, Diego had his detractors, often justified in their criticism. He could be boorish, foul-mouthed, self-destructive, and time and again allowed himself to be led down dark roads by unscrupulous managers, agents and hangers-on.

But he was also a symbol of hope, proof that any kid with a dream, no matter how humble or difficult their upbringing, could rise up and reach the pinnacle of human achievement.

Maradona was born on October 30, 1960, in the Policlinica Lanus, a short distance from the tiny, ramshackle home he shared with parents, Don Diego and Dona Tota, and his seven siblings in the shanty town Villa Fiorito.

As a child he honed his unique footballing abilities in the informal matches held on the wastelands and dirt roads of the villa , in a childhood which also moulded him psychologically. No opponent was too big, too intimidating or too vicious for the little Pelusa to take on and humiliate with his other-wordly dribbling skills, or to confront when he felt an injustice had been committed.

By the age of 16 he was already wowing fans with Argentinos Juniors, having made his debut against Talleres in a match which, so the story goes, hundreds of thousands claim to have witnessed first-hand, dwarfing the capacity of the La Paternal stadium which now carries his name.

A short but dazzling spell with local giants Boca Juniors followed, forging a mutual love between club and player which persisted until his dying day, as did his explosive stint under Cesar Menotti at Barcelona, marred by the horrifying ankle injury inflicted by Andoni Goikoetxea, the ‘Butcher of Bilbao’, and the beginnings of a drug addiction that would overshadow so many of his later years.

But it was upon arriving at unfashionable Napoli in 1984 that Maradona began the transformation from player to demi-god.

The shanty-town kid from Buenos Aires’ impoverished periphery immediately identified with his new neighbours in the historically oppressed south of Italy, poor relations to their wealthier cousins in the north. “Napoli, welcome to Italy,” proclaimed a banner in Verona’s Stadio Marcantonio Bentegodi on Diego’s debut, in which the hosts ran out comfortable 3-1 victors.

Maradona and Napoli would have the last laugh, however.

Scudetti in 1987 and 1990 as well as Coppa Italia and UEFA Cup glory banished forever the inferiority complex the Naples faithful suffered, making Diego in the process an all-time legend at San Paolo.

His time in Italy may ultimately have ended under a cloud, leaving shortly after the 1990 World Cup after receiving a ban for testing positive for cocaine, but he remained an idol in his adopted home city, which on Wednesday was plunged into a state of mourning just as acute as in Buenos Aires.

The definitive Maradona moment, or moments, though, arose in the sunshine of Mexico City one balmy July afternoon.

In the course of 90 minutes Argentina’s No.10 scored two goals against England: the first, probably the most polemic ever seen in the history of the tournament; the second, a contender for its greatest ever goal.

“It was a little bit the head of Diego, and a little the hand of God,” he said after that quarter-final, coining at a stroke a name fit for the impudence of his goal, palmed over the head of the bewildered Peter Shilton; while there was no need for poetic invention to baptise his slaloming run through the heart of the Three Lions defence, known simply as the ‘Goal of the Century.’

Is there any better summary of Diego’s life, his genius and wickedness, than the fact that both those strikes occurred in a single match?