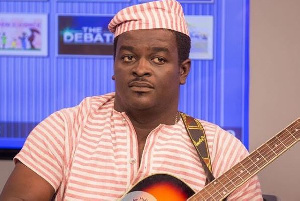 Multi-talented Highlife musician, Kumi Guitar born Nana Yaw Kumi, has labelled both the National Democratic Congress (NDC) and the New Patriotic Party (NPP) as the cause of the abject poverty and underdevelopment of the country.

“You can see the damage both NPP and NDC have been causing us as a nation. This one comes to power and will buy a lot of cars but when they leave the one who comes after will abandon them to rot but it’s our money that was used to purchase those vehicles. You’d go to some places and you’ll see motorbikes, other places are houses and because the one who started is no more in government we allow it to go waste and we allow rodents and reptiles to take over the abandoned building project whether it’s a school or hospital but all these would have to stop.” he revealed.

Kumi Guitar made these candid revelations in an exclusive interview with Amansan Krakye on Kastle Drive monitored by MyNewsGh.com when asked whether realistically he feels we need a third political party to govern us.

He answered “Sometimes we need to test the people and we’ve tested one and two and these two are always blaming each other. When it happens like that we the citizens are the ones who’ll continue to suffer. I was thinking that well if we’ve tried both NPP and NDC and they’re both not helping us why not try the third one.

My point is that there is no government which comes to power and every Ghanaian becomes self-sufficient. When NDC party comes some people will be satisfied but others may not. When NPP party is in government some people get a job do but others might also lose their jobs.

So left with me alone let’s rather focus more on peace so that whoever you think it’s best for you then you can vote for the one. But I think that we need to test all the waters because we’ve given both NPP and NDC their chances so we need a third party.

If we give someone else the opportunity and both NPP and NDC are in opposition that’s when we’ll know whether they’ll continue their blame game whilst both of them are in opposition or if they’ll join forces to condemn the third party which has been voted into office”.

Kumi Guitar revealed that the phenomenon of replacing NPP with NDC and vice versa is the cause of the major problems we face as a country so there is a need to have a blueprint to be followed by all and sundry.

“There should be a plan for Ghana so that irrespective of the government of the day we would still follow one particular blueprint to ensure that we resolve our underdevelopment challenges. Then we’ll know whether all this while they have been joking with us or they are serious.

But that one also depends on the same Ghanaians because most of us vote based on the party our parents are affiliated to but we need to let the politicians know that we live in the country with our children so if things don’t go well it’s our kids that will suffer in future.

So we need a party that will help all of us but that seems impossible that’s why we need peace to go about our daily lives to ensure that at least we can make ends meet”, he concluded on Kastle FM in Cape Coast.

If a woman loves you, she treats you like her son – Dzifa Sweetness