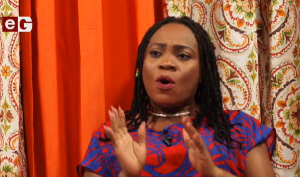 Ghanaian sex coach, Dzifa Sweetness, has shared some tips for men on how they can be sure if their girlfriends love him or they are only in for their own personal gains.

Interviewed on Ghana’s number one adult edutainment show ‘In Bed with Adwen’ which airs on eTV Ghana, she told host, Adwen the Love Doctor that when a woman loves a man, she treats him as though he was her son.

The sex coach explained that “If I say she treats you like she’s your mother, I don’t mean she imposes on you. I don’t mean she will monitor your phone calls and be mad about who calls you as and when, or that she will call you whenever you’re out late, all furious and insisting that you come home.

I mean if a woman loves you, she makes sure you eat well, you dress well, and basically thinks of your well-being even before thinking about hers. If a woman really loves you, she will not cook for herself only and leave nothing for you just because you did not give her daily upkeep money”.

She furthered that when a woman loves a man, she is always willing to sacrifice for him and support him whenever he is down, be it financially, emotionally or in whichever way. A woman will also have a maximum level of respect for a man if she loves him, but can even wound or kill him in the course of an argument if she does not love him.

Dzifa, after pointing out these tips, advised that men do not waste their time on women who per these, do not love them, thinking and hoping it will go as far as marriage because there is no way that union will be a peaceful and successful.