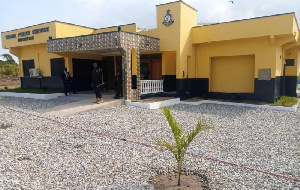 The Winneba District Police Command has been elevated to Divisional Command status and with a call on the personnel to display utmost professionalism, accountability, commitment and to respect the civil populace they serve.

Mr James Oppong-Boanuh, Inspector-General of Police (IGP) who made the call at a ceremony at Winneba to officially commission a Police Station each at Essuekyir and Ntakofam, also inspected three other police station projects under construction.

The IGP stated that two additional Police District Commands were created to serve the University Education Winneba (UEW) Communities and the northern part of Effutu Municipality.

“Effective policing, crime prevention and control, thrive on shared responsibility between the police and the public”, the IGP said.

He stated that it was imperative for the police to consistently demonstrate impartiality, fairness, respect the civil liberties and human rights of the people and also to avoid all forms of corrupt practices to eliminate bad perception and incessant media backlash in order to build public confidence in them.

The IGP zipping-Buanuh applauded the Effutu Municipal Assembly and the Mr. Alexander Afenyo-Markin, Member of Parliament for the area, for their relentless commitment and efforts, which saw the early completion of the two edifices.

He said the projects will support the police service to execute its mandate and also address the security concerns of the ever-increasing population and expansion of socio-economic activities in the area.

He said the current societal dynamics, the political landscape, social-economic activities, evolution of complex crimes, ever-increasing population and the advancement of information and communication technology demanded the realigning of police operations.

According to him, recent studies conducted revealed that Effutuman was among the fastest growing communities in Ghana with a number of hospitals, second cycle and tertiary institutions, wide stretch of beach resorts and the Police Command and Staff College and the unique “Aboakyer and Masquerade festivities”.

It was therefore obvious that security facilities needed to be expanded to prioritize security services to boost the economic development of the area. The Police, he noted, had put comprehensive and concrete security measures in place to ensure that there was peace before, during and after the electioneering process, he added.

He appealed to people of Effutu to see themselves as one people, bury their personal differences and not allow partisan politics to divide them, saying the election was not war, but a time to contribute their quota for peaceful coexistence.