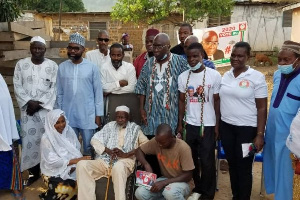 Reverend Dr. Divine Ayivor, Running Mate of the People’s National Convention (PNC) has said the nation must break free from the two major political parties in order to progress.

He alleged that the people voted “undecidedly,” in a “one way-voting” pattern that was affecting development and added, “if it is a spell that has been cast on Ghanaians to vote for NPP and NDC, it must break in the name of God.”

The Running Mate said this at the Ho Central Market on Tuesday, when he tried to woo traders at the Ho Market during a campaign tour of the Volta and Oti Regions.

“You are suffering after voting for NPP and NDC whether it is juju or what, I don’t know. It is time to bring about a change after voting for the same two parties for the past 20 years,” Dr Ayivor said.

He said unlike “most political parties,” which he alleged were “only after the votes and would disappear with the mandate soon as they secure power,” the PNC had long awaited its turn to serve.

Dr Ayivor said the PNC was a party born of the Nkrumah stock, and thus its policies were different and could be executed by no other.

He further claimed that most policies being promoted and pursued by the two major parties, including; the free SHS, and the health insurance scheme were “from the PNC’s books.”

“Others cannot implement it because it is not their origin,” he said, and appealed to Ghanaians to help the PNC “deliver prosperity to all Ghanaians.

“Please help us. Vote for prosperity. You might not have voted for us before but please give us the chance and the change you want will come,” Dr Ayivor appealed.

The Running Mate, later during a courtesy call on chiefs and elders of the Zongo Community, asked them to help continue the tradition of Dr Hilla Limann, founder of the PNC and who was “one of your own.”

He said Limann left a legacy that was free of “any corruption scandal” and that the PNC could be trusted with the development of Ghana.

Dr Ayivor promised the community that the free education policy would be restructured to provide equal opportunity for all, and to eliminate unemployment and its related association of tertiary school graduates.

“Unemployed graduates association is a disgrace to Ghana. Ghana is not lazy. It has lands and resources.

Most communities continue to suffer despite the same voting pattern. No roads, health facilities, yet politicians manage to send ballot boxes there.

Leaders neglect their responsibilities and people suffer. The time has come.
We are looking forward and the forward is looking good.

Vote for PNC for peace, development and prosperity,” he said.

Alhaji Adamu Armani Dagadu, a Chief of the community, said he was moved by the position of the party, and that “if all politicians would speak like this and live on what they say, the nation would develop.

“If God has ordained you to lead us for the next for years, let it be so. Your utterances and calmness shows you are not fully a politician but a workaholic,” he said.