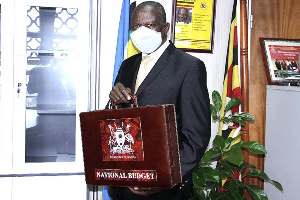 Government has indefinitely suspended payment of all allowances for its workers due to poor cash flow.

However, in a memo sent on Wednesday to the Permanent Secretary (PS), Secretary to Treasury (ST), the Ministry of Finance said the payments for the staff of State House, Ministry of Defence and other priority agencies and statutory obligations would not be affected.

“Reference is made to a meeting in your office (PS/ST, Accountant General and Director Budget) regarding cash flow for November-December 2020. It was agreed that given the cash position, only payment for the following should be made: State House, Ministry of Defence; wages, salaries, pension and gratuity; statutory obligations and Electoral Commission. All other payments should be deferred until further advice from the PS/ST,” reads the memo issued by the Accountant General, Mr Lawrence Semakula.

These allowances constitute nearly 80 per cent of civil servants’ upkeep as their payroll salaries are largely inadequate.

Given the Accountant General’s memo, it means that also government payments for compensations arising from court awards and other litigation processes through the Attorney General have been affected.

The Minister of Finance, Mr Matia Kasaija, yesterday downplayed the cash crisis and dismissed the speculation that government has run broke.

“We are just short on cash. Being broke and being short on cash are two different things,” Mr Kasaija said by telephone.

“Things will get back to normal, we are trying to get a loan from somewhere I cannot tell you, as we also work on our revenues stream,” he added. One of the government sectors which have been affected by the suspension of funds is the Judiciary.

“Operation funds were drastically cut yet cases have not reduced. In fact, we have had more defilement cases registered in this COVID-19 era than ever before,” a source in the Judiciary said yesterday.

In the 2020/2021financial year budget, government scrapped facilitation for foreign and domestic travel as a way of cost-cutting.

Commenting on the memo yesterday, spokesperson of the Finance Ministry, Mr Jim Mugunga, said the Secretary to the Treasury, Mr Keith Muhakanizi, in his guidance covering the Covid-19 period, set out broader government priority expenditures, which have not expired.

“The internal memo in reference is an additional emphasis covering the period mentioned but does not negate any other sectors, including health and education, as is being alleged,” Mr Mugunga said.

“The Ministry of Finance and government at large, remain committed to serving and honouring obligations in accordance with the budget and available resource envelope… there is no need for panic and government is not broke,” he added.

At the commencement of the current financial year in July, government borrowed $300m (about Shs1 trillion) from World Bank in addition to $491m (Shs1.8 trillion), which had been acquired from the International Monetary Fund to plug budgetary deficits following the Coronavirus pandemic and the lockdown that nearly brought the economy to its knees.

The country’s economic growth projections for this year have since been revised down, with real GDP expected to recover later in 2021 to about 3.7 per cent—which is still a 2.5 per cent decline compared to the pre-Covid projection.

Namibia to sell 170 elephants to protect its wlildlife