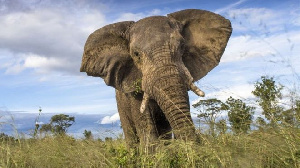 170 elephants in Namibia will soon be giving-up their homes amid pressure from drought and territorial conflict with humans.

The Pachyderms on sale would comprise entire herds in order to preserve the important social structure in elephant communities.

The ministry says the elephants are being sold “due to drought and increase in elephant numbers coupled with human-elephant conflict incidences.”

For export purposes, the buyers must ensure that CITES requirements are met by both exporting and importing states for the trade to be authorised,

The sparsely-populated semi-arid southern African country has been criticized of recent for shooting elephants to control overpopulation.

According official estimates, Namibia is home to some 28,000 elephants.

Last year the government offered for sale around 1,000 animals including 600 buffalo, 150 springboks, 60 giraffes and 28 elephants.