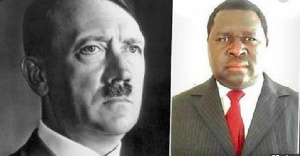 In Namibia, a certain politician named after the former German leader, Adolf Hitler has been elected as a local councilor for the governing Swapo party.

Adolf Hitler Uunona was elected with 85% of the votes in the regional vote to emerge the winner in Ompundja, a small town in the far north of the country.

Hitler confirmed that his father gave him the name after the German Nazi leader and probably wasn’t aware of his ideologies.

Hitler, 54, is among the popular politicians in the Southwest region of the country from his firm stand as an anti-apartheid activist.

Interviewed by the great German tabloid Bild, he said that there was no problem as he grew up that Adolf was a common name in the former German colony.

“It was a perfectly normal name for me when I was a kid. It wasn’t until I grew older that I realized that this man wanted to subjugate the whole world and killed millions of Jews,” he told Bild.

Adolf doesn’t use Hitler in his social media handles, but still, apply the name in official documents.

When asked why he couldn’t change the name before, he replied it was too late for that.

“It’s in all official documents, it’s too late for that,” he replied to Bild. He later found a solution: he identifies himself as Adolf Uunona in public, leaving Hitler aside. His wife also prefers to call him Adolf, a way to shed some of the weight linked to such a name associated with the worst atrocities of the 20th century.

‘I don’t owe a pesewa’ – Domelevo to Audit Service Board

Namibia to sell 170 elephants to protect its wlildlife