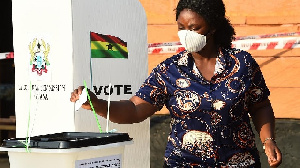 A member of the European Union election observation mission (EUEOM), Caliguiri Giovanni has indicated that the observer group has its members scattered across the country to monitor happening during the election period.

He told the media that the group will collate the findings and present it through its chief observer from Italy.

“The European Union election observation mission started to observe the entire process before the elections.

“Today is just one part of our observation but we are going to issue a press statement after the election. So in a couple of days, you will get our findings because, at this moment, other colleagues are observing other polling stations… ” Mr Giovanni told Class News’ Isaac Ohene.

Voting has officially ended throughout the country.

The exercise, which began at 7 am officially ended at 5 pm.

LIVESTREAMING: Updates on wins and losses in Ghana’s election