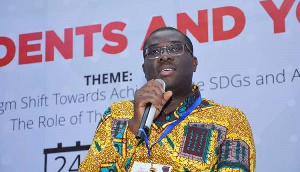 The New Patriotic Party has called for the prosecution of officials of the Electoral Commission who tampered with ballot sheets during Monday’s nation voting exercise.

National Organizer of the party, Sammi Awuku, speaking to the media after observing the exercise at the Mensah Sarbah Hall polling station in the Ayawaso West Wuogon constituency said that the actions of the officials are against electoral rules.

Describing these situations as grievous, he says that the action already taken by the Electoral Commission against these officials are not enough.

Sammi Awuku wants them to face the full rigours of the law.

Meanwhile, Sammi Awuku says that the party is satisfied with the electoral processes so far.

Although he admits cases of irregularity, he says that they are not widespread.