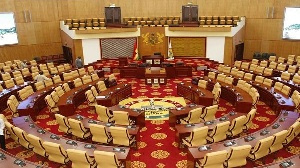 The Herald has picked up intelligence from insiders in the governing New Patriotic Party (NPP) that many of the party’s stalwarts and election experts, have given up on having majority seats in Parliament, and focus on the Presidential election.

Most of them see a slim victory for President Akufo-Addo, against National Democratic Congress’ (NDC) John Dramani Mahama, but massive defeat for the NPP parliamentary candidates across the country.

They told The Herald that, there is some goodwill for Akufo-Addo and they are counting on this to retain the Presidency.

The NPP holds 169 seats in Parliament, while the NDC, has 106 seats out of the 275, but party pundits, who have measured the heartbeats of the various constituencies are of a strong opinion that, the balance is definitely going to tilt differently.

Top echelons of the party are of the view that most of the MPs have not worked hard to be retained, hence could be rejected by the electorates as happened during the party’s parliamentary primary, where over 40 incumbents Members of Parliament (MP) were rejected.

Some other MPs, the party feared could be voted out at the primary, were shielded from the contest.

The feeling on the ground is that, in places where there are independent candidates who are from the party, there could be a major upset for them.

The Bekwai Constituency is mentioned as shaking for Joseph Osei-Owusu, with the independent candidate there most likely to dislodge him, the same way he had done to the incumbent MP in 2008.

Yaw Buabeng Asamoah’s Adentan Constituency in the Greater Accra Region is mentioned as shaking. The party will not be surprised if he is beaten by Mr Ramadan of the NDC. It will be a miracle for the incumbent to be retained.

It is believed that John Dumelo, could dislodge Lydia Seyram Alhassan, the incumbent MP.

The NPP’s headache is University of Ghana students, as well as GIMPA students where the party draws the bulk of its support from are not on campus due to COVID-19, and hence could spell doom for the party in the Ayawaso West Wuogon.

But there are reports that money is being thrown around massively by the ruling party to have the status quo maintained.

The Herald also picked up other NPP seats under threat as Krowor, Ledzokuku and La-Dade-Kotopon with NDC most likely to sweep all three seats in the coastal area.

Abokobi-Madina Constituency, where Abu-Bakar Siddique Boniface is MP and being challenged by the NDC’s Lawyer Francis-Xavier Sosu, has been labelled as 50/50 with any of the two going through by a slim margin.

Meanwhile, the John Mahama camp is strongly hopeful to beat Mr Akufo-Addo for the second time and thus leaving nothing to chance.

They were of the view that any victory of the President will be through electoral fraud, hence preaching vigilance among its members.

They are going into the election to knockout Nana Akufo-Addo.

Poverty, corruption and the general wellbeing of Ghanaians have worsened, and these are going to decide the election.