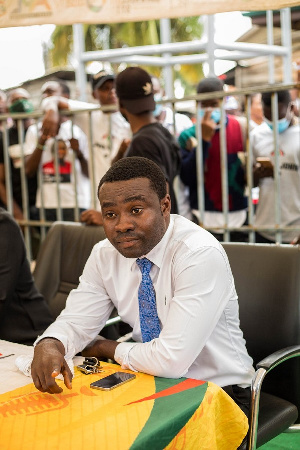 An independent candidate contesting the Ayawaso West Wuogon parliamentary election, Richard Amegatse, has accused two of his opponents of attempting to influence the choice of voters with money.

The two are the incumbent MP for the area, Madam Lydia Seyram Alhassan, and John Dumelo, who is contesting on the ticket of the National Democratic Congress.

Richard Amegatse has claimed to be a witness of these acts, saying that he has personally seen the two candidates attempting to woo voters with money.

Notwithstanding these allegations, Richard Amegatse is confident to win the Ayawaso West Wuogon parliamentary seat after the December 7 general elections.

“I hope the people of Ayawaso West are not going to choose a corrupt leadership who don’t have any regard for rules and regulation, but they’re going to choose a candidate that is trusted and is decent and I expect that the decision that they’re going to make tomorrow will solely rest on that. If that be the case, then surely then Richard Amegatse will emerge victorious,” he said.