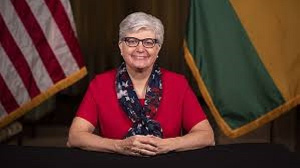 The Ambassador of the United States of America to Ghana, Stephanie S. Sullivan, is monitoring Ghana’s ongoing elections at some polling stations in Accra.

The Ambassador to USA ???????? having a talking with the votersPosted by Ohene Isaac on Sunday, December 6, 2020

She was at the St. Thomas Aquinas polling centre at Labone within the La Dadekotopon Constituency where she interacted with some of the voters who had queued and waiting to cast their ballot.

She asked one of the voters what time she got up and why she decided to get up so early to vote.

Ms Sullivan also asked the voters if any of them was a first-time voter and inquired from them if they noticed, “anything so different this year”.

The Ambassador also interacted with some of the staff of the Electoral Commission (EC), as they waited for the electoral materials to arrive for the voting to start.

The Ambassador as at the polling centre around 6 am.

Today, about 17,027,971 eligible Ghanaian voters are expected to cast their ballot, as part of the process of electing a new President and 275 new Members of Parliament for a fresh four-year mandate.

There are 12 candidates vying for the presidency.

The rest are Mr David Apasera of the PNC and Mr Kofi Akpaloo of the LPG.

For the 2020 election, the EC has created 38,622 polling stations across the country.

According to the election management body, that figure is some 10,000 polling stations more than those used in the 2016 polls.

The threshold is 749 voters per polling stations.

“It is important to note, however, that more than 70% of the polling stations have 500 voters or less,” EC Chair Jean Mensa told journalists on Sunday, 6 December 2020.

“We have reduced the threshold to minimise overcrowding and long queues,” she explained, adding: “We have no doubt that voters will enjoy a hassle-free and seamless experience at all polling stations across the country.”

The EC has trained some 240,000 field officials for the election.

It is using 74,800 brand new biometric verification devices in this election.

Nana Addo Dankwa Akufo-Addo was born on 29 March 1944. He is the incumbent President of Ghana.

He previously served as Attorney General from 2001 to 2003 and as Minister of Foreign Affairs from 2003 to 2007 under the Kufuor administration.

Nana Akufo-Addo first ran for president in 2008 and again in 2012 but lost both times, as the candidate of the New Patriotic Party (NPP). He was defeated on both occasions by the National Democratic Congress’ (NDC) candidates: Prof John Evans Atta Mills (2008) and John Dramani Mahama (2012).

He was elected as the presidential candidate of the New Patriotic Party for a third time for the 2016 general elections in which he defeated the incumbent, Mr John Dramani Mahama in the first round.

Nana Akufo-Addo is a lawyer.

He previously served as Vice-President of Ghana from January 2009 to July 2012 and took office as president on 24 July 2012 following the death of his boss, Prof John Atta Mills in office.

Mr Mahama is a communication expert, historian and writer.

The pastor launched the Ghana Union Movement (GUM) in March 2019.

During the event, he described himself as the new Kwame Nkrumah and declared that the “spirit of Nkrumah is back”.

He hopes to be able to break the duopoly jinx of the National Democratic Congress and the New Patriotic Party (NPP), which have dominated Ghanaian politics in the Fourth Republic.

Osofo Kyiri Abosom is a farmer, entrepreneur and businessman.

In 2004, he was elected by the Convention People’s Party (CPP) as its parliamentary candidate for the Ayawaso West Wuogon Constituency, which he lost to Akosua Frema Osei-Opare (the current Chief of Staff in the Akufo-Addo government) of the New Patriotic Party (NPP).

He was the first General Secretary to be re-elected twice for the CPP.

He was elected the flagbearer of the party in the lead-up to the 2016 election but could not win the presidency.

Mr Greenstreet is a lawyer.

She is the founder and leader of the Ghana Freedom Party (GFP).

She was barred from the 2012 polls by the Electoral Commission over errors on her nomination forms.

She ran for president again in the 2016 polls but was disqualified again by the EC.

She is a cocoa farmer.

Her running mate is Ernest Frimpong Manso, a journalist.

Dr Henry Herbert Lartey is an accountant and entrepreneur.

He led the Great Consolidated Popular Party (GCPP) in the 2012 election but lost. He polled 38,250 votes out of the more than 10.7 million votes cast.

He replaced his father Daniel Augustus Lartey as the leader of the (GCPP).

He believes in domestication

Mr Hassan Ayariga is an accountant and an entrepreneur.

He is the founder of the All People’s Congress (APC).

He was the presidential candidate of the People’s National Convention in the December 2012 presidential election. He polled 24,621 of the more than 10.7 million votes cast.

In the presidential primaries of the PNC for the 2016 general election, Mr Ayariga lost to Dr Edward Mahama, whom he had beaten to become presidential candidate in 2012.

Citing anomalies and cheating, he left the party to form a new party, the All People’s Congress (APC) in 2016.

He was disqualified from contesting in the 2016 elections over anomalies on his documents.

He was the leader of the party in the 2012 election but won no seats.

He was disqualified from contesting the 2016 election as the presidential candidate of the party by the Electoral Commission, a decision he unsuccessfully contested in court.

Mr Akpaloo dissolved the IPP and formed the Liberal Party of Ghana in its stead in March 2017.

He was selected by the party to stand as its presidential candidate in the 2020 election.

He is a former member of parliament for the Bolgatanga constituency of the Upper East Region from 2001 to 2004.

He was elected flagbearer of the People’s National Convention (PNC) in 2020 to contest the December polls.

This is his first attempt at the presidency.

His running mate is Divine Ayivor

Brigitte Dzogbenuku is the founder and Executive Director of Mentoring Women Ghana (MWG), which runs programmes that inspire and empower young women and girls into making a positive difference in their communities. She won the Fortune/Goldman Sachs Women’s Leadership Award in 2008.

Prior to her work at MWG she was General Manager of Aviation Social Centre, a fitness and recreational centre in Accra, where she introduced various innovative fitness programs and events into this niche industry in Ghana. In 2011, she founded Recreational Facilities Management, which became Helm Management Services.

In this role, she managed the Barclays Bank Club House for four years, until September 2015. She has also established Ve Flavour Industries, an edible palm-oil production and packaging for-profit company that works with women in the Volta region of Ghana, contributing to their socio-economic empowerment.

She is also a certified Empowerment Trainer and also served on the Board of Enactus, Ghana.

Brigitte holds a BA in Modern Languages from the University of Ghana, Legon.

She is a former beauty queen. She won the Miss Ghana pageant more than two decades ago.

In 2016, she served as the running mate to Dr Papa Kwesi Nduom of the PPP. The party was, however, disqualified by the Electoral Commission due to errors on their nomination documents.

She was elected flagbearer to contest in this year’s election.

She is leading the party again in this year’s general elections.

Mr Alfred Kwame Asiedu Walker is the only independent candidate among the lot.

Mr Walker was disqualified from contesting the 2016 presidential election as an independent candidate by the Electoral Commission due to anomalies with his nomination papers.

He unsuccessfully contested this in court prior to the election.

In October, he successfully filed nomination papers to contest the 2020 general election as an independent candidate for the presidency.

He is an industrial designer.