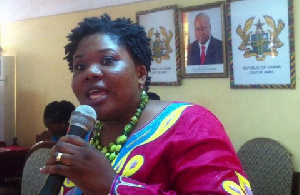 Rejected ballots were 559 with total votes cast standing at 75, 556

This means Mrs Quaye, who won the seat for the New Patriotic Party in 2016 won the seat in her first time contesting.

Mrs Quaye who doubles as the Minister in charge of Fisheries and Aquaculture Development is a first-time parliamentarian.

She is coming up against Mrs Agnes Naa Momo Lartey of the National Democratic Congress (NDC) who lost the 2016 election by 2,106 votes despite campaigning for only three months.

In the 2016 parliamentary elections, Mrs Elizabeth Afoley Quaye of the NPP polled 32,463 while Mrs Agnes Naa Momo Lartey of the NDC garnering 30,357

A total of 99,923 registered voters are expected to vote in today’s Presidential and Parliamentary elections at the Krowor Constituency in the Greater Accra Region.

The NDC supporters are in jubilation after waiting for long hours for the defeated MP to concede defeat.