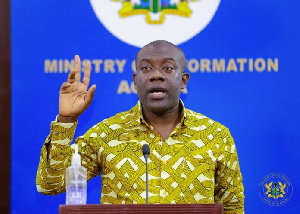 Government has described as irresponsible calls by the opposition National Democratic Congress that its members should pour out and jubilate over the results 2020 polls.

Former President Mahama in a terse address Tuesday night said the NDC won the elections and will not allow “anyone to steal the ballot”.

Mr. Mahama also reiterated the party’s claim that they have won the majority in parliament.

However reacting to the claim, Information Minister Kojo Oppong Nkrumah said the utterances of the former President are unfortunate.

“A claim by Mr Mahama that his party has won parliamentary majority is false. So it is important that this claim is shot down now. The figure the electoral commission is putting out is very clear and we want everyone and the international community to take note of it,” the Ofoase Ayirebi MP said.

He stressed: “It is must be said that it is utterly irresponsible for Mr Mahama to ask his supporters to get out there and jubilate. That is contrary to the Peace Pact that was signed by Presidential candidates before the elections. So his actions go against what he himself signed on to as a candidate”.

Meanwhile, the Electoral Commission (EC) has extended its timeline for results declaration for the 2020 Presidential and Parliamentary polls.

The EC had sent out invitation for the event which was scheduled for 5pm Tuesday in line with its projections before the polls.

However, in a statement, the EC said it was shifting the announcement to a latter period to enable them efficiently collate the results.

The electoral commission last month defended its decision to announce the results of the December 7 presidential elections within 24 hours.

The NDC has kicked against any hasty decision from the EC following its earlier announcement.

But addressing the media, Chairperson for the commission Madam Jean Mensa assured adequate measures have been deployed to ensure timely transmissions of all sixteen regions.

She also noted that the CI 127 governing the elections allows for constituency results to be sent to the regions for subsequent forwarding to the EC head office unlike before when the head office received results directly.

According to her, the EC has the confidence of meeting the said target of calling the elections within twenty-four hours