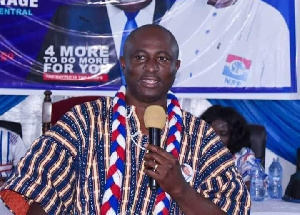 Upper East Regional Chairman for the New Patriotic Party (NPP) Lawyer Anthony Namoo has told the group calling on him to resign that he is not ready to chicken out.

A Group calling itself Patriotic Movement for Growth in a statement issued on Monday December 14, 2020 called on the Regional Chairman to resign from his position after the party performed abysmally during the just ended general elections.

Contrary to the targets set by the party to win seven seats in the region, the party rather lost two of the seats it occupies in the region and also reduced the margin of votes it gained in the 2016 elections.

“Unfortunately, the region was headed for a record worst performance. The region was to lose all its 3 seats and decrease its share of the Presidential votes to about 32%. The region was to suffer from leadership paralysis. A leadership that provided no direction to achieving any of its own set targets,” a group called Patriotic Movement for Growth said in a statement.

Against this backdrop, the Group called for the Regional Chairman who led the party into the 2020 elections to resign from his position.

But speaking to Bolgatanga-based Dreamz FM monitored by MyNewsGh.com, Anthony Namoo said he is not ready to chicken out of the position.

To him, the party and its executives worked their hearts out at ensuring that their targets are met and that if they could not achieve their targets, that does not mean they did not work like the Group wants to suggest.

“This is the time for us to examine what went wrong. It is when that examination has been done and it found out that the regional chairman and his executives did ABCD that was wrong. In that case, a blame can come but not haven’t done that not haven’t contributed anything to the party, only for them to mushroom and just sprout just recently to come be blaming people. This group are malcontent,” he said.

The legal practitioner said he closed his office and worked and did not go to court for the period because he believed that there is the need to invest time in the party.

“Though the target we set for ourselves we couldn’t achieve it, that does not mean we didn’t work hard. I had to collapse my office and virtually did not go to court. I had to make sure that we led the campaign and we did the best that we can. You may have the best footballers in the world but sometimes Barcelona for instance loses matches,” he added.