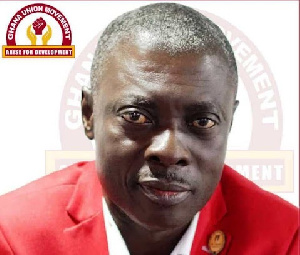 After the 2020 general elections, the political party that made an impact aside the usual NPP and NDC was the Ghana Union Movement (GUM).

GUM, one of the twelve political parties and independent candidates that contested the 2020 elections, was founded by Christian Kwabena Andrews, also known as Osofo Kyiri Abosom. He is the head pastor of the Life Assembly Worship Centre in Accra.

Prior to the launch of GUM, Osofo Kyiri Abosom declared that he was the new “Kwame Nkrumah” and he is in the political sphere to awaken the “spirit of Nkrumah”. GUM cultivates its agenda, ideals and philosophy around Osagyefo Dr. Kwame Nkrumah.

Andrews filed his nomination papers on 7 October 2020 at the Electoral Commission headquarters in Accra. On completion of the registration process, his name was balloted to appear third from the top on the ballot paper. Osofo Kyiri Abosom nominated Abu Grant Lukeman as his running mate for the election.

Even though none of his parliamentary candidates was able to secure a seat in the next Parliament, he managed as a first-timer to secure 105,548 of the presidential valid votes cast representing 0.80 per cent, taking the third position behind the NPP and the NDC.