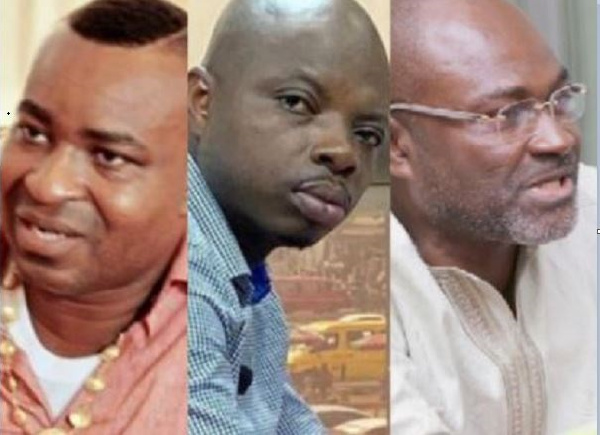 Typical of election years, some Ghanaian politicians have caused stirs with their bold and eye-popping utterances throughout 2020.

While targeting their opponents in most cases, these politicians make bizarre declarations in public without mincing words.

While some of these statements were unintentional, others were meant to provoke a reaction from people.

GhanaWeb has been on the lookout for such remarks especially in recent times where news has been incessantly flooding social media.

Find below the compilation of statements made by some Ghanaian politicians that raised many eyebrows:

“So now what he does is that he posts his daughter indicating that she is now of age. Someone will catch her and do something to her for him to realize that if you have a daughter you will hide her”.
These were the words of Mr. Benard Bosiako popularly known as ‘Chairman Wontumi’ in an interview with Wontumi Radio in October, 2020.

The NPP Ashanti Regional Chairman prior to the 2020 general elections asked NDC’s Flagbearer, John Dramani Mahama, and his family to ensure that his daughter Farida Mahama is not exposed on social media as they have allowed.

According to him, flaunting Farida Mahama and making her known across the world is not in good taste because she will be prone to all kinds of social vices.

These comments, however, attracted criticisms from top personalities including Ghanaian Actress Ama K. Abebrese as well as the leadership of the NDC demanding his arrest.

He was, however, reported to the Ashanti Regional Police Command over what the opposition party described as ‘treacherous’ comments.

Bono Ahafo Chairman of the NPP, Kwame Baffoe popularly known Abronye DC alleged that former President John Dramani Mahama is hatching a plot to assassinate some key NPP members as he did to the late Professor Evans Atta Mills.
He raised the assassination claims in a discussion with Net 2 TV in May 2020.

Buttressing his point, the NPP Chairman maintained that his claims were true and for that matter, he called on the police to expedite investigations into the matter.

“I wish to state categorically that, a politician of my calibre acknowledging very well the laws of this country, I will never make any statement, allegation or utterance(s) without the necessary evidence having at the back of my mind that, as a legal norm in Ghana and other commonwealth nations, ‘he who alleges must prove’”, he said.

“I have not breached any statute and for the avoidance of doubt, I have a barrel full of better and further particulars (evidence) comprising of audio recordings, phone calls recordings and WhatsApp messages to substantiate seriatim all my claims and allegations concerning my statements about an alleged plot of assassination against me.” He added.

An NDC legal representation made up of Victor Kojogah Adawuda, Francis Xavier Sosu, and Dr Basit Bamba had series of confrontations with some police officers over their decision to detain radio presenter Oheneba Boamah Bennie for allegedly threatening the life of President Nana Addo Dankwa Akufo-Addo.

It was during one of such confrontations that Lawyer Adawuda issued a threat to the police officers saying “you have families, you have wives, you have children, and we know where they are so do it well.”

Lawyer Adawuda was said to be throwing tantrums at the car park of the CID headquarters and even announced that he was ready to die at the scene because the police denied their client bail.

At a debate held for parliamentary candidates in the Ayawaso West Wuogon constituency prior to the December elections, Lydia Seyram Alhassan labeled John Dumelo ‘unreasonable’ for not seeking permission before dredging gutters in the constituency.

Touching on controversies that emerged after John was asked to stop dredging gutters in the municipality, Lydia Alhassan while speaking in the local dialect said;

John Dumelo who did not take the comments lightly demanded an apology and retraction from the MP who also vehemently refused to do so.

At the final rally of the New Patriotic Party in Accra ahead of the 2020 general elections, President Nana Addo Dankwa Akufo-Addo in his quest to introduce NPP’s Parliamentary Candidate for the Odododiodoo Constituency mistakenly mentioned the name of the NDC’S Nii Lante Vanderpuje.

“I didn’t speak well at all. I have a made mistake. What am I going to do with Nii Lante Vanderpuye?I meant Nii Lante Bannerman and I want you all to vote him”, Nana Akufo-Addo said as the crowd cheered and applauded.

‘We’ll burn all your houses’ – Kennedy Agyapong warns Mahama, others

‘We’ll burn all your houses’ – Kennedy Agyapong warns Mahama, others

Member of Parliament for Assin Central Kennedy Ohene Agyapong threatened to burn the houses of former President John Dramani Mahama and some NDC bigwigs, adding that they are the ones responsible for the recent and incessant burning of markets in the country.

He warned the former president to relocate from his residence else he will gather people to the place and burn his property.

“Mahama, let me tell you, you stay at Chain Homes, which belongs to Alhaji Seidu Agongo. You cannot go and burn somebody’s fourteen stalls and go scot-free. Mahama, Asiedu Nketia, Akamba, Baba Jamal, you should be careful, else we’ll burn your houses too. If it continues like that, Mahama we’ll burn your house and if you don’t take care, we’ll burn you the human being. We cannot allow these things to go on in this country.” Kennedy Agyapong said on ‘The Dialogue’ show on Net 2 TV, Wednesday, December 23.

“If they burn any market again, Mahama Chain Homes is there; do you think you are the [only] ones that can organise? I now dare you [Mahama], Asiedu Nketia, Gbevlo-Lartey, Akamba and Baba Jamal…if we hear any burning in any part of the country, Mahama we’ll burn your house,” he stressed.

I have two licensed guns and pistol, bring on the fight – Kennedy Agyapong

In the quest to declare his readiness towards dealing with any individual who would plan to cause violence in his constituency during the 2020 general elections, the Assin Central MP said;

“They said about 30 metres in the NPP strongholds, they will start firing guns. Anyone who doesn’t like peace in the country will be gunned down. It will not be like the 2008 elections when they said security broke down. I have licensed two guns and a pistol. That’s for me alone and I’m ready like Rambo,” he said on Net2TV.

His comments was in reaction to Mr. Mahama for saying his administration started the Free SHS policy.

Speaking at the Ayawaso West Wuogon constituency to wrap up his two-day tour of the Greater Accra Region, he said;
“Mahama’s campaign has fallen in the water. His campaign has landed in confusion, misrepresentations and outright fabrications. That is the campaign of John Dramani Mahama today in Ghana. You cannot go to the presidency of Ghana with lies and fabrications. The Ghanaian people will not allow that to happen,”

NDC’s National Communications Officer, Sammy Gyamfi in the heat of the campaign for the December 7, 2020 general elections, warned that men and women in uniform who he claims are doing the bidding of the ruling NPP will be dealt with should the NDC win the polls.

“Notice is hereby served to all unscrupulous Security Officials who have lent themselves to the despotic Akufo-Addo government as plaint agents of violence against innocent citizens, that the next NDC government will fish them out and deal with them mercilessly when power eventually shifts,” the NDC lead communicator said.