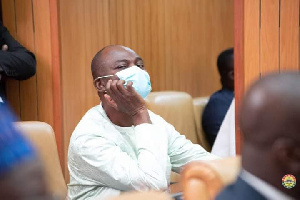 National Democratic Congress (NDC) activist, Yayra Koku, has expressed surprise at the conduct of Assin Central Member of Parliament, Kennedy Agyapong, during the election of the Speaker of Parliament, saying that he should be made the Chairman of the Peace Council for his peaceful conduct during the rather rancorous and violent process that led to the election of the NDC’s Alban Bagbin as the Speaker of Ghana’s Eighth Parliament of the Fourth Republic.

Mr Agyapong, seen as aggressive by many, has regularly picked fights with others, but in the Chamber of Parliament during the contentious election of the Speaker, Mr Agyapong was surprisingly engaged in calming tempers and talking his colleague MPs on the New Patriotic Party (NPP) side out of confrontations.

“Kennedy Agyapong was too quiet. I still don’t understand. Is it the case that he is a coward and can only talk on TV/Radio or he is no more the Ken we all know him to be?

“The last time I heard him on TV, he said NDC members are behaving like they are the only MEN in this country so I was expecting him to face them in parliament but he was rather the peacemaker. Congrats Peacemaker Kennedy Agyapong. You need to be the Peace council Chairman,” Yayra Koku said on social media.

Kennedy Agyapong, a long-standing MP for the New Patriotic Party (NPP) has been praised by many for behaving honorably in Parliament even as others engaged in violent exchanges and even outright fights.

Election of Alban Bagbin as Speaker

In the early hours of January 7, 2020, Alban Bagbin was elected Speaker, winning against the NPP’s candidate, Professor Mike Oquaye.

Both the NPP and NDC have 137 MPs each. But the independent MP for Fomena had said that he was going to vote with the NPP. The NPP, therefore, expected Prof Mike Oquaye to win the Speakership position.