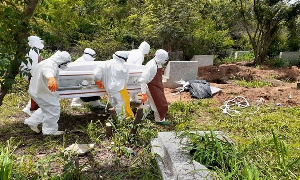 A nurse whose identity has been concealed for fear of victimization has opened up on what is happening inside Ghana’s Isolation and Treatment Center in the Greater Accra Region.

The Ga East Hospital is overwhelmed by the increasing number of intakes of COVID-19 cases which started three weeks ago and 30 percent of people on admission are on oxygen.

A Nurse who braced himself for any consequences said he can no longer keep quiet over what health authorities are afraid to talk about because they don’t want to cause fear and panic.

According to the nurse, 70 percent of the cases are coming from the community and not travellers who came down from outside Ghana.

The Nurse who spoke to Alfred Ocansey on the Sunrise Morning Show on 3FM said the cases are real and the staff cannot bring pictures out because of victimization.

He said patients are fighting for their lives almost on daily basis.

“Now the Virus is trying to let us know how severe it can be. Now the cases that are coming they are young folks: it is not about your age, or you having condition or not. We are pleading with the public to observe the safety protocols. Now we are the only hospital admitting so those hospitals like Nyaho Clinic and Korle-Bu are no longer taking patients”.

He said people are dying almost on daily bases but was hesitant to put out the numbers. He, however, said that “People are dying in their homes but because they don’t have any idea about the condition they let it go and take it as if normal death. We are pleading because now those we have in the facility about 30 percent are on Oxygen fighting for their lives.”

He also opened up on the type of patients on admission.