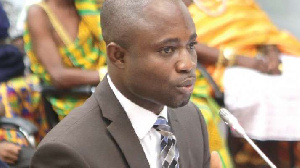 The Member of Parliament for Juaboso, Kwabena Mintah Akandoh has joined the growing list of notable personalities who have decided against allowing their wards to go back to school despite the reopening of schools after nearly 10 months of closure.

Speaking to GhanaWeb in parliament, the Member of Parliament’s Health Committee said his decision is based on current developments and the strains of information he is privy to.

According to him, even though he cannot necessarily advise parents against sending their children to school, it will be hypocritical for him to allow his children to go to school at this time.

“As a family man, I am not going to allow my children to go to school. That is a personal decision I’ve made. I am not saying everybody should listen to me and take the same position. But I am being frank with you. I am not a hypocrite that I will say it is not a good time then I will let my children go or I will say it’s a good time then I ….. no, as far as I am concerned and where I sit, I serve on the Health Committee and with the information, I am privy to, I think that even if I would allow my children go to school it won’t be this first week,” he said.

In the MPs assertion, the only condition that will cause him to allow his children go to school will be when there is a clear indication of the containment of the resurging outbreak of COVID-19 in the country.

Over the last few weeks, Ghana’s COVID-19 numbers have increased from around a few hundred to over two thousand.

This and the resulting concerns notwithstanding, the government of Ghana has gone ahead with its planned reopening of schools.

Some notable personalities including MP for Ningo Prampram, Samuel Nartey George have indicated their unwillingness to allow their children go back to school amid the rising number of cases.

Today at the News Stands