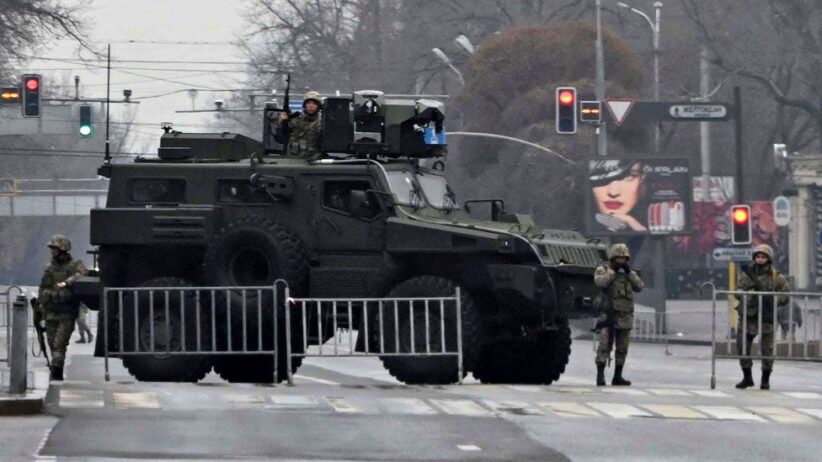 He told leaders of a military alliance of ex-Soviet states the action had been co-ordinated by a “single centre”, but did not name those responsible.

President Putin said Kazakhstan had been targeted by international terrorism, but provided no evidence for this claim.

He added that Russia would never allow revolutions in the region.

Troops from Russia and other countries are currently in Kazakhstan to restore order.

The demonstrations, triggered by a rise in fuel prices, turned into the worst unrest the country has seen in its 30 years of independence. Dozens of people are reported to have died, including 16 members of the security forces.

The protests started on 2 January and grew to reflect discontent at the government and former President Nursultan Nazarbayev, who led Kazakhstan for three decades and is still thought to retain significant influence.

Correspondents say the recent violence may be linked to a power struggle within the ruling elite.

A week after violence erupted, the authorities say the situation has now stabilised, with troops continuing “clean-up” operations and guarding strategic facilities.

A state of emergency and a nationwide curfew remain in place. Almost 8,000 people have been detained throughout the country, the Interior Ministry said on Monday.

The security talks between leaders of the Russian-led Collective Security Treaty Organisation (CSTO) military alliance came as Kazakhstan began an official day of mourning to commemorate those killed in the unrest.

“Armed militants who were waiting in the wings joined the protests. The main goal was obvious: the undermining of the constitutional order, the destruction of government institutions and the seizure of power. It was an attempted coup d’etat,” Mr Tokayev said.

He said protesters had targeted Kazakhstan’s biggest city, Almaty, with a view to seizing the country’s southern regions and the capital, Nur-Sultan. A hunt for “terrorists” was continuing and Kazakhstan would soon give proof of what had happened to the international community, he added.

Mr Putin said he believed some involved in the violence in recent days had been trained in foreign countries, without giving evidence.

“Well organised and clearly managed groups of militants were used, about which President Tokayev just spoke, including those who obviously underwent training in terrorist camps abroad,” Mr Putin told other leaders on the video conference.

“Events in Kazakhstan are not the first nor the last attempt to meddle into our internal affairs from abroad.

“Measures taken by CSTO show that we will not allow a destabilised situation in the region and we will not let them carry out so-called colour revolutions.”

Last week, US Secretary of State Antony Blinken questioned Kazakhstan’s decision to seek Russian military help, as the first of about 2,030 Russian-led troops arrived in the country. Officials in Moscow gave assurances their presence was temporary.

Mr Blinken urged the Kazakh authorities to respect the rights of protesters while maintaining law and order.

Russia has long accused the West of encouraging uprisings in its back yard – so-called “colour revolutions” – that have brought down governments in former Soviet states such as Ukraine, Georgia, Kyrgyzstan and Armenia.

Events in Kazakhstan come at a time when tensions are high over tens of thousands of Russian troops massed on the border with Ukraine, prompting fears of an invasion.

Where is it? Kazakhstan shares borders with Russia to the north and China to the east. It is a huge country the size of Western Europe.

Why does it matter? A former Soviet republic which is mainly Muslim with a large Russian minority, it has vast mineral resources, with 3% of global oil reserves and important coal and gas sectors.

Why is it making the news? Fuel riots, which have escalated to become broader protests against the government, have resulted in resignations at the top and a bloody crackdown on protesters.