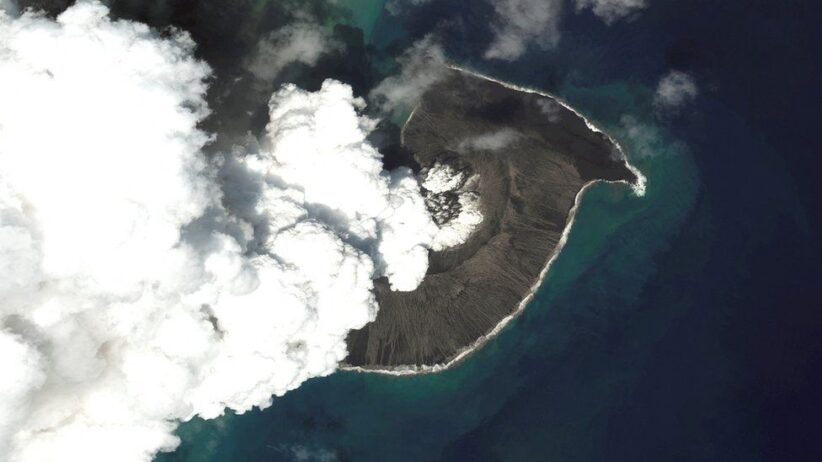 A key undersea cable that was destroyed in a volcano eruption in Tonga may take at least four weeks to be repaired, said New Zealand’s foreign ministry.

The cable was severed during a volcanic eruption on Saturday, crippling communications and cutting the Pacific island off from the outside world.

The eruption also caused a tsunami, which left at least three dead – including a British national.

Teams have been working round the clock to get vital supplies to the region.

“US cable company SubCom advises it will take at least four weeks for Tonga’s cable connection to be repaired,” a statement by New Zealand’s foreign affairs ministry said on Wednesday.

SubCom, a repair contractor for more than 50,000 km (31,070 miles) of cable in the South Pacific, said it was working with telecommunications company Tonga Cable to mobilise a ship for the cable repairs, Reuters reported.

Tonga has been unable to establish contact with the rest of the world since Saturday’s violent eruption severed the country’s only underwater cable in two places.

Scant communication has been established since then, enabled only through a few satellite phones mainly held by foreign embassies in the capital city Nuku’alofa. Many Tongans abroad have since been waiting to hear news from loved ones.

Telecommunications firm Digicel is expected to set up an interim 2G connection today that prioritises voice and SMS communications, the statement added.

However the connection is expected to be “limited and patchy”, covering about 10% of regular capacity.

This is not the first time Tonga’s only undersea cable has been damaged. A bout of bad weather in 2019 inflicted unexpected damage on the cable, causing a near total blackout of mobile and internet services for the 100,000 residents in the island nation.

Amanda Watson, a research fellow from the Australian National University’s Department of Pacific Affairs, said the incident highlighted the importance of telecommunications and internet access in Pacific island nations. Several of them only have one underwater cable each.

“It would be ideal if each country could have more than one cable, in order to provide for some redundancy in the event that one cable is damaged,” she said.

On Wednesday morning the Red Cross said it had “joyfully and happily” been able to make contact with its team in Tonga for the first time since the eruption, its Pacific Head of Delegation Katie Greenwood told the BBC’s Newsday programme.

“Unfortunately there is devastating news from Tonga overnight with the loss and destruction of homes,” she said.

Ms Greenwood added that the Red Cross teams were working to distribute clean water, and that a recent campaign telling people to cover their rain water tanks to protect them from ash had worked and provided a boost to bottled water supplies.

The eruption – described by the Tongan government as an “unprecedented disaster” – caused wide swathes of Tonga to be blanketed in thick ash, hampering relief planes from landing and delivering much-needed food and drinking water.

New Zealand authorities say Tonga’s main airport runway is expected to be cleared on Wednesday, after rescue teams and hundreds of volunteers desperately worked to clear ash from the tarmac using wheelbarrows and shovels.

A UN representative for the region added that while clearing ash on the main island of Tongatapu had proven more difficult than expected, good progress had been made and it was hoped that flights might soon resume.

“We thought that it would be operational [Tuesday], but it hasn’t been fully cleared yet because more ash has been falling,” Jonathan Veitch told reporters.

Mr Veitch also praised the quick response of New Zealand and Australia in working to dispatch aid via navy ships, which he said had the ability to desalinate sea water and provide fresh supplies for the local population.

The ships are expected to arrive on Friday, and the New Zealand government has a C130 Hercules plane also ready to go with supplies, once the airport runway is clear.

But Tongan officials have also expressed concern that deliveries could spread Covid, with the country only recording its first case in October.

The UN said it was unclear if personnel could be sent to assist, but that supplies like water and food could be delivered as the main island’s port remained viable.

There have been reports of food supplies at shops running low and deliveries have been deemed a priority.

Saturday’s volcanic eruption was felt as far away as the US. In Peru, two people drowned in abnormally high waves while beaches near the capital Lima were closed off following an oil spill.