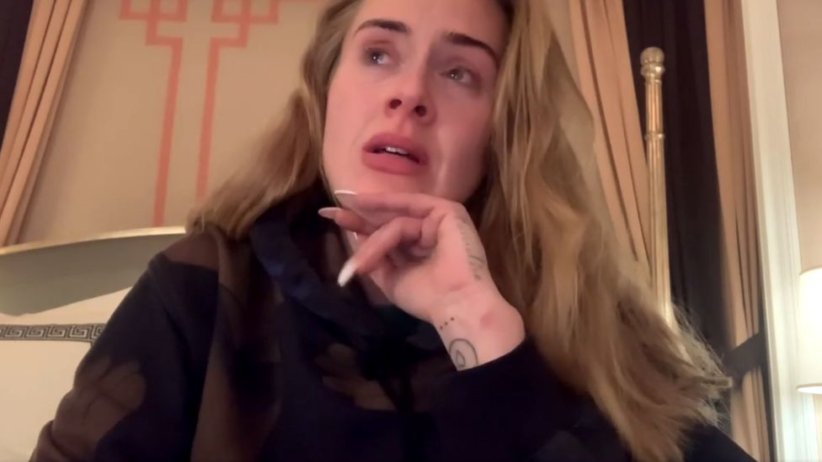 “I’m so sorry, but my show ain’t ready,” the star told fans in a tearful update on Instagram.

“Half my team have Covid and it’s been impossible to finish the show,” she said, adding that “delivery delays” had also played havoc with her plans.

She was due to play the first of 24 concerts at the Caesars Palace’s Colosseum on Friday.

Announced late in November, the Weekends With Adele series was scheduled to have the singer performing two shows every weekend until April.

They would have been her first live concerts in five years. Along with two dates in London’s Hyde Park this summer, they are the only shows she has announced to promote her blockbuster fourth album, 30.

Speaking on Instagram, Adele said she had been “awake for 30 hours” trying to rescue the production, but had simply “run out of time”.

“It’s been impossible to finish the show,” she added. “I can’t give you what I have right now and I’m gutted.”

Adele also apologised to fans who had already arrived to Las Vegas for the opening weekend.

She added: “We’re going to reschedule all the dates, we’re on it right now. And I’m going to finish my show. I want to to get it to where it’s supposed to be [but] we’ve been up against so much and it just ain’t ready.”

Many fans have been supportive on social media – saying it was the right decision and wishing her and her team well.

But some are facing losing hundreds of dollars from flight and hotel bookings.

Gillian Rowland-Kain, 32, was already on her flight to Las Vegas from New York for Friday’s opening night show when she found out about the cancellation via social media.

“I was furious that Adele waited so last minute to make this call,” she said. “I recognise it’s not a call any artist wants to make but she would’ve known yesterday that the show wouldn’t be ready by tomorrow.

“Her lack of notice is astounding. I’m angry and frustrated.”

Ms Rowland-Kain, who is from Brooklyn and travelling to Vegas with her twin sister, added that while she recognised the impact of Covid, the last-minute cancellation felt “like a slap in the face”.

Josh Chavis, from Kansas City, says his wife Heather paid almost $1,800 (£1,300) for her hotel and flights to Vegas for a show this weekend.

While Heather was on hold with the hotel company, Mr Chavis told the BBC she was disappointed – and even Adele announcing it a few days sooner “would have made all the difference” in terms of refunds.

“We recognise that things are hard for everyone, but this is a huge misstep on the part of both the performer and those responsible for putting the show together,” he said.

The star was previously forced to cancel the final two dates of her previous tour, at Wembley Stadium in 2017 after damaging her vocal cords.

While Adele has apparently been beset by production problems and illness within her crew, other Vegas shows have been running as normal.

Three weeks ago, Katy Perry smoothly rolled out her own residency on the strip, to largely positive reviews.

Her elaborate and playful production – which she has dubbed “Perry Playland”- includes oversized talking furniture, a giant red rocking horse, a dancing alarm clock and a bra that serves beer on tap.

Billboard magazine described the two-hour show as “part fantasy, part hallucination and thoroughly high-camp”, while the Las Vegas Review-Journal called it a “glorious example of what an unbridled imagination can achieve”.