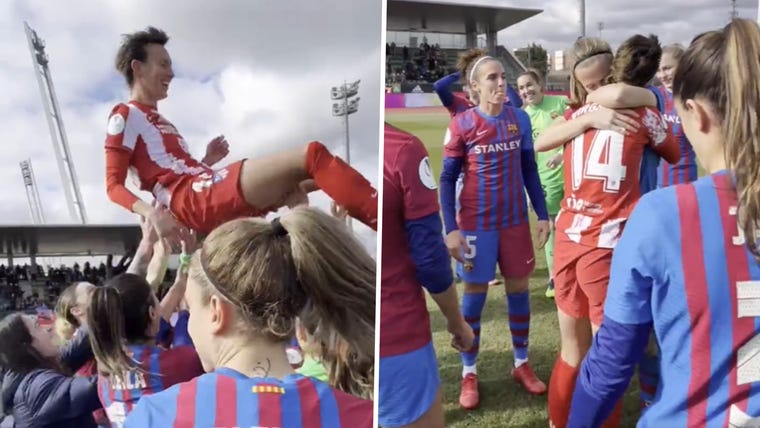 Atletico Madrid star Virginia Torrecilla was thrown in the air by the Barcelona Femeni squad after her return from a brain tumour on Sunday.

Torrecilla came off the bench late on during Atletico’s 7-0 loss to Barca in the Spanish Supercopa final, recording her first competitive appearance since March 2020.

The 27-year-old has successfully recovered from surgery on a brain tumour to resume her professional career, and her return to action was celebrated by both clubs after the final.

The Barca team paused their trophy celebrations to embrace Torrecilla after the final whistle before lifting her up and throwing her into the air multiple times while shouting “hooray”.

Torrecilla expressed her joy in a video posted on Atletico’s Twitter account, thanking the club for all their support after finally seeing all her treatment away from the pitch pay off.

“I’m very happy to be here with [my teammates] and to share everything,” she said. “This is a very important step. A lot of time has passed. It has been about effort, a lot of sacrifice and a lot of training.

“I have to thank the club, they’ve always been with me. This is my reward. Being here in the dressing room and on the pitch, it’s very special.”

Afcon 2021: Gambia have six players sleeping in one room in the middle of Covid-19 – Saintfiet