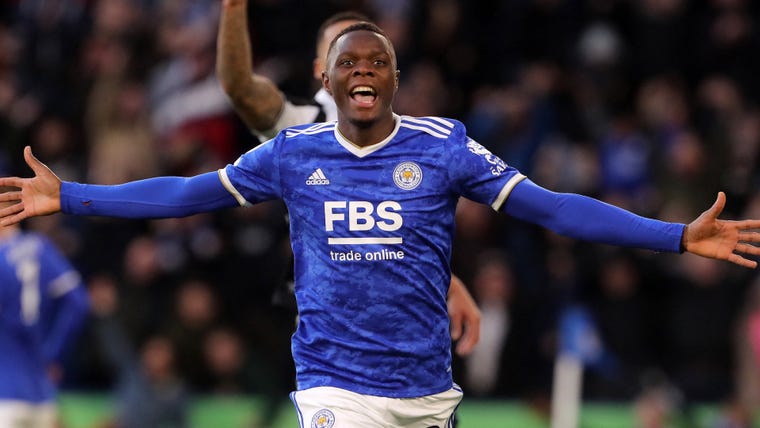 Zambia international Patson Daka was on target as Leicester City battled to a 1-1 draw against Brighton & Hove Albion in a Premier League fixture on Sunday.

The 23-year-old Chipolopolo forward put the Foxes ahead at King Power Stadium in the 46th minute before the visiting side snatched a late draw courtesy of Danny Welbeck’s strike in the 82nd minute.

With Nigeria striker Kelechi Iheanacho representing the Super Eagles at the Africa Cup of Nations in Cameroon, manager Brendan Rodgers gave Daka the striking role with Ademola Lookman playing behind him alongside James Maddison.

Daka, who joined Leicester from Red Bull Salzburg at the start of the season, should have scored in the 12th minute after his well-timed first-time effort was stopped by Brighton’s goalkeeper Robert Sanchez.

Five minutes later, Dan Burn watched helplessly as his header was cleared off the line by Youri Tielemans and a minute later, goalkeeper Kasper Schmeichel produced a wonderful save diving to his right to deny Leandro Trossard.

The Foxes, who were also boosted with the return of Ghana defender Daniel Amartey after the Black Stars’ early exit from the Afcon finals, continued to attack for the opener and it arrived a minute after the second half kicked off.

Harvey Barnes thought he had found the back of the net but his effort was punched back to play Sanchez, but Daka was at hand to smash it home and put the home side ahead.

However, with four minutes left to the final whistle, Welbeck snatched a vital point for the Seagulls after his powerful header sneaked past Schmeichel to hit the back of the net.

Daka, who was later substituted for Ayoze Perez, has now scored four top-flight goals for the Foxes from nine appearances. Meanwhile, another Zambia international Enock Mwepu did not feature in the game owing to an injury.

Daka and Leicester will now shift their focus to the fourth round of the FA Cup when they take on Nottingham Forest on Saturday before they travel to face Liverpool in the Premier League at Anfield on February 10.