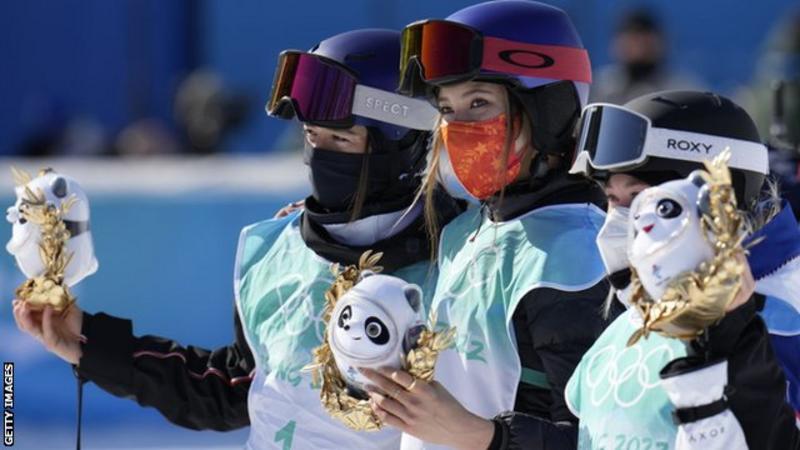 Home favourite Eileen Gu claimed the gold with 188.25 after a massive 94.50 on her final jump, which pushed France’s Tess Ledeux into silver with 187.50. Switzerland’s Mathilde Gremaud claimed bronze.

“It feels amazing [to be a part of it]. I couldn’t have hoped to have skied better today and I’m so proud of all the girls.”

But while a tactical second jump gave her a solid base, the pressure was on to push for a high-scoring third trick to try and nudge into the medal positions.

Muir said she decided on one she had not performed in a competition before but could not land it.

“I went for a switch misty 10 in the last jump which I’ve never tried before – I just wanted to go for it, and I’m just so happy that I went and tried it,” she said.

Gu, dubbed the “snow princess” who switched from representing the country of her birth, the United States, to her mum’s homeland, is one of only a few skiers who are competing in big air, slopestyle and halfpipe at these Games.

She found herself in the bronze medal position after two runs and decided she needed to pull out a trick – a 1620 – she had not previously attempted before if she was going to challenge for gold. Shougang Park held its breath and then exploded into wild cheers when she landed it.

At 18, Gu becomes China’s youngest individual gold medallist at a Winter Games and has two more events to attempt to add to the collection.

Muir and Gu are next in action on Sunday, in slopestyle qualification, and Muir said after her Olympics is over, it’s back to her education in Aberdeen.

“I’ve got a bit of studying to catch up for sure,” she said. “I’m focused on my next event and then it’s back to school.”