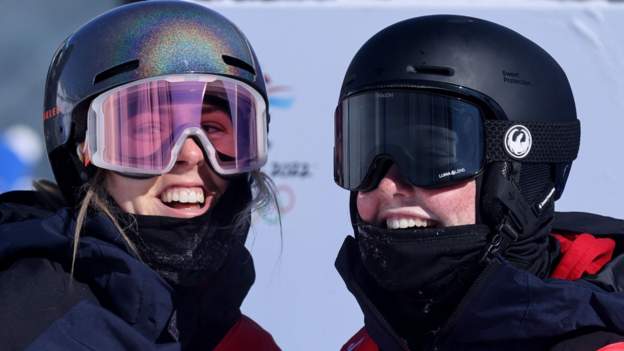 Freestyle skiers Kirsty Muir and Katie Summerhayes will try to win Team GB’s long-awaited first medal of the 2022 Winter Olympics on Tuesday after qualifying for the slopestyle final.

Summerhayes moved into her third Olympic slopestyle final with a top score of 66.56 to qualify in 10th.

Ormerod, who was 18th in the slopestyle last week, finished 25th after falling on two of her three runs.

“I don’t usually fall in big air,” she told BBC Sport. “I knew I could do these tricks. These are the ones I usually do for qualification. I got it on my second jump and then I decided to go for my cab 9 because I knew I needed that to go into the finals. Unfortunately I just didn’t quite make the landing.

“Although it really sucks, I struggled with this jump all week. I just couldn’t clear it very well. It’s been tough.”

‘Hoping to clean everything up’

Slopestyle qualification had been rescheduled to Monday after heavy snowfall and poor visibility at the Genting Snow Park in Zhangjiakou on Sunday.

In temperatures of -25C, Estonia’s Kelly Sildaru progressed top of qualification after scoring 86.15 on her second run, while China’s ‘snow princess’ Eileen Gu – who won the big air title last week – was third.

But 2018 Olympic champion Sarah Hoefflin of Switzerland failed to reach the final, while American Marin Hamill looked to sustain a serious injury after crashing on the last jump.

Muir, who is Team GB’s youngest competitor at these Games and finished fifth in the freeski big air, told BBC Sport: “I feel like I definitely had a few mistakes in the first run, and not as good on my second, but I’m hoping to clean everything up.”

“I’m pretty stoked to get another chance.”

Top 10 finish for Fear and Gibson

France’s pre-Games favourites and four-time world champions Gabriella Papadakis and Guillaume Cizeron took the gold medal in the ice dance with a total of 226.98.

“I feel such confidence leaving this experience; we completed two really good performances at the Olympics,” said Fear. “It can be daunting but knowing we can do it just fills us with optimism.

“Knowing we’ve done it well is the biggest thing, we didn’t shy away from the experience.”

Officer who allegedly shot four persons in Tamale held, he is being interrogated – Police