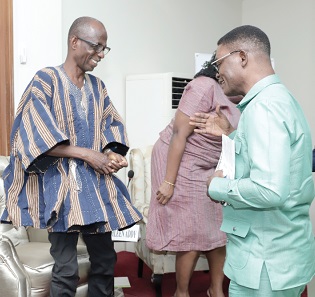 The General Secretary of the National Democratic Congress (NDC), Johnson Asiedu Nketiah, and former Foreign Affairs and Regional Integration Minister, Akwasi Osei-Adjei of the New Patriotic Party (NPP), said it was only when state-funded political parties and candidates that Ghanaians could boldly hold parties and politicians accountable for their stewardship and curb corruption.

Aside from that, they said state funding would also cure the ills of few wealthy financiers hijacking parties and coming out with policies that responded to their needs and not that of the marginalised.

The two, who were responding to a question of how political parties could ensure that young people were not marginalised, made the call during a round-table discussion on “Sustaining democracy in the context of erosion: Lessons from Europe and Africa” in Accra last Friday.

The event, moderated by the Deputy Chairperson of the National Commission for Civic Education (NCCE), Kathleen Addy, was jointly organised by the Institute for Democratic Governance (IDEG) and the Ghana Centre for Democratic Development (CDD-Ghana).

Mr Nketiah said no country could assume that political parties were important building blocks of democracy and yet “close your mind as to how they get funding”.

He, therefore, proposed the enactment of appropriate legislation to govern the funding of political parties and candidates so that “we will then be able to hold people accountable.”

“When we take control over how political parties and candidates are funded, then we will begin to have a democracy that will have a buy-in of the marginalised groups; otherwise we are approaching a situation where democracy will be there in form but it has in effect been hijacked,” he said.

To ensure the inclusion of traditional authorities in a democracy, Mr Osei-Adjei suggested the establishment of a second chamber system composed of chiefs to serve as checks and balances and hold presidents more accountable to the people.