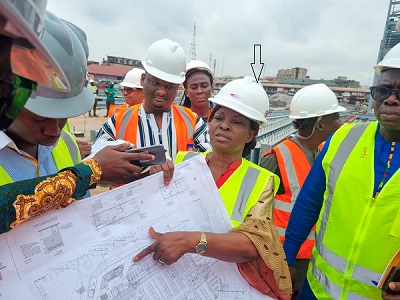 Her comment followed a five-day working visit to the region to inspect and validate the level of progress of government’s projects in the region.

The Ghanaian economy is currently reeling under record inflation and the fallout of the Ukraine War amid cuts in government spending ostensibly to avoid a full-blown debt crisis.

However, Ms Konadu said government’s developmental projects across the regions remained on course.

She said she was convinced that ongoing developmental projects across the country would aid in the rebound of the economy.

Speaking to journalists during the tour, she said “it is the belief of this government that when all the projects are complete, the impact they will bring to bear on the lives of the people will be massive. The President is committed to transforming Ghana through massive developmental projects, and these are evident across the country”.

She further indicated that the government conducted thorough due diligence before embarking on the developmental projects, stressing that “the beauty about the visionary president is that before initiating a project, he makes sure he secures the funds for it”.

The Ashanti Region is witnessing a number of projects, including the Komfo Anokye Teaching Hospital Maternity block which was abandoned for 40 years, construction of a modernised Kumasi Central Market, an upgraded Kumasi International Airport, a modern Regional Hospital and an infectious disease centre at Sewua, construction of Military Hospital at Afari and various road networks.

President Nana Addo Dankwa Akufo-Addo promised to implement a $17 billion programme to boost growth in one of West Africa’s largest economies, but the government points to the COVID-19 pandemic and Russia’s invasion of Ukraine in particular for hitting the price of oil and other major export commodities this year, resulting in further contraction in nearly 40 years for Ghana, one of Africa’s largest cocoa and gold producers.

Ms Konadu, however, said interventions such as One-district, One-factory; free senior high school; One-district, One-ambulance; and Planting for Food and Jobs would not only spur the economy but “set the agenda for transformational prosperity”.

This week in Parliament: Interior Minister to brief House on Ghana Card