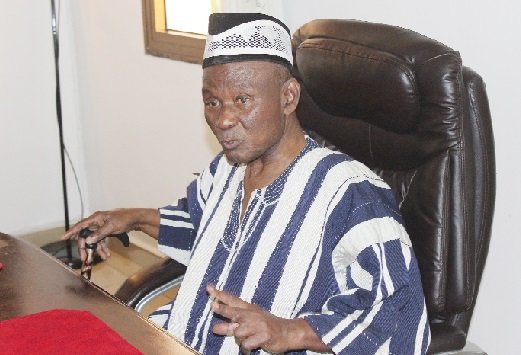 The Paramount Chief of the Nandom Traditional Area, Naa Professor Edmund Mwinyem Delle Chiir VIII, has pledged to get the elders of the Convention People’s Party (CPP) to resolve the current crisis in the party.

He said since he was now a chief and the law debarred chiefs from taking part in active politics, he could only work behind the scenes for the elders to resolve the problems.

“As a chief, I am not supposed to be an active politician, but of course CPP is in my blood so I cannot ran away from it,” he told the Daily Graphic in an interview.

“It saddens me that the CPP should be a laughing stock after I have left,” he stated.

The decision to suspend the three was allegedly taken at a Central Committee (CC) meeting of the party, but eight elected national executive members have indicated that the alleged meeting was illegal and did not also form a quorum.

It has also emerged that out of the nine members elected national executives, eight are united against the National Chairperson, Nana Sarpong-Kumankumah, because they feel she did not garner the required votes to be chairperson.

According to them, Nana Sarpong-Kumankumah, who is also the leader of the party per its Constitution, did not obtain the 50 per cent or more votes needed to validate her election as Chairperson. They have, thus, recommended a run-off between the now deposed chairperson and her closest contender in the 2020 internal polls, Hajia Hamdatu Ibrahim.

Naa Prof. Delle Chiir said he had been contacted on the quiet and pledged to help resolve the issues through the elders of the party.

As to why he abandoned the party, he said, “I didn’t abandon CPP. Actually, I was campaigning to become a flag bearer of the CPP. It was the pressure of the family that took me away to become the chief of Nandom.

“I love CPP but my current position does not allow me to take part in active politics, but they know my heart is with them. CPP will never die because some of us sacrificed our time,” he said.