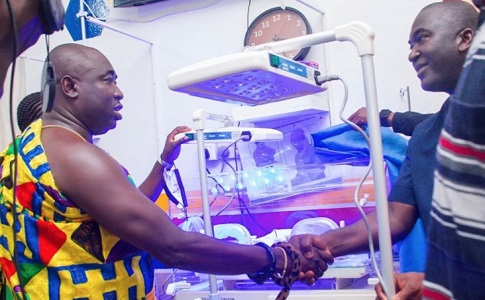 The Agogo Presbyterian Hospital in the Ashanti Region has taken delivery of an incubator and two phototherapy equipment from Bayport Savings and Loans to help deliver quality healthcare services to patrons of the health facility.

Worth GH¢100,000, the equipment was made possible through the Brogya Foundation, a charity organisation that was founded by Nana Bediako Brogya Sarpong, the Dompiahene of the Asante Akyem Agogo Traditional Area.

The equipment will advance the treatment of and care for pre-term babies specifically, and broadly help prevent infant mortality at the hospital which is a critical referral health facility in the region.

While the incubator is to reduce neonatal deaths among pre-term babies, the phototherapy is used to treat jaundice in newborn babies.

The Chief Commercial Officer at Bayport Savings and Loans, Allen Jubin, in an interview with journalists at the handing over ceremony at Agogo, stated that the donation was in line with the company’s environmental, social and governance (ESG) commitments which sought to bring real benefits to the communities in which it operated.

“Bayport chose to support the Agogo Hospital through the Brogya Foundation because it aligns very much with our ESG agenda for the next five years that focuses on health – as we are seeing today – and education. The latter takes the form of scholarships for gifted, needy students,” he said.

Mr Jubin indicated that pre-term care remained a critical aspect of healthcare delivery in the quest to significantly reduce cases of infant mortality in the country.

He said Bayport was hopeful that the donated equipment would assist the hospital to save the lives of both babies and mothers.

“We intend to continue with donations such as this to ensure that the communities in which we operate can benefit from more than our financial services as we empower and grow with them,” he added.

For his part, Nana Sarpong, expressed appreciation to Bayport for heeding the call of the foundation to reach out to the health facility.

“It is my prayer that other companies will support the Brogya Foundation to improve the lives of children in Agogo and surrounding communities; we are an open and transparent organisation and will continue to lead a good cause by ensuring that whatever support that we get goes to the right place,” he indicated.

The General Manager of the Agogo Hospital, Alex Kesse, said the equipment would help the facility to operate at the optimum level in taking care of pre-term babies and their mothers.

He indicated that the facility, which served the Asante Akyem area and surrounding communities, had only six phototherapy machines and five incubators.

He expressed the hope that the donation would serve as an eye-opener for other benefactors to support the facility.

“I want to thank Bayport for this donation. We hope this will be the start of a very cordial relationship with them through the Brogya Foundation,” he added.