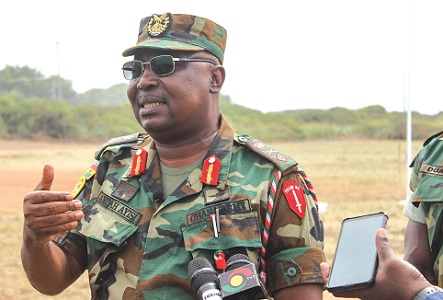 Security agencies, the public and the media must work together to effectively respond to contemporary security threats, the General Officer Commanding the Southern Command, Brigadier General Michael Ayisi Amoah, has said.

At the opening of a two-day inter-unit shooting competition among various units of the Southern Command last Tuesday, Brig. Gen. Amoah said the country was not immune to threats of terrorism, violent extremism, secession and insurgency, hence the need to work together to efficiently tackle the current threats of insecurity.

The competition was to sharpen the skills of personnel of the command to be combat ready to deal with any potential threats to the peace and security of the country.

Dubbed: “Exercise Fire Storm 2022”, the shooting competition at the Teshie Gallery Range was among six units of the Southern Command.

They were the First, Second and Fifth Battalions of Infantry; the 66 Artillery Regiment, the 48 Engineers Regiment, and the Southern Command camp.

They fired shots ranging between 70 and 300 metres from the targets.

The Commander said while it was critical that the units trained and worked together to efficiently tackle the threat of insecurity, the army must also work with other security agencies to improve interoperability which would aid the fight against the current security challenges.

Brig. Gen. Amoah challenged all unit commanders to find innovative ways of reaching out to the general public and work together to combat the threats of insecurity

“Without the assurance and cooperation of the general public, efforts by the army and other security agencies will not yield the desired goals,” the commanding officer said.

He also urged the public to complement the efforts of the security agencies by providing timely information about the activities of miscreants and negative elements for their eradication in order to provide a safe environment for all residents.

For the media, Brig. Gen. Amoah urged both private and public media organisations to refrain from using their platform to fuel negative reportage and sensationalism as that had the potential of being used as part of a propaganda by negative forces.

Brig. Gen Amoah, explained that the rationale behind the annual competition was to prepare personnel to respond more effectively to contemporary threats of secession, terrorism, vigilantism, illegal mining and possible formation of armed groups to destabilise the country.

All these activities, he said, occurred mainly in the urban terrain, hence the need to sharpen the workmanship skills of personnel to help minimise collateral damage in the event of lethal engagements with belligerents.

He added that the objective of the exercise was to test the marksmanship of a platoon size force on a semi-independent operation, improve individual fitness and endurance, enhance cooperation, unit pride, among others.

As part of the competition, civilians were also invited not just as witnesses but to partake in the exercise to gain hands-on experience by firing selected light weapons.

At the end of the contest, WOII Koli Emmanuel from the Southern Command Unit, was adjudged the winner of overall best shot, while WOII Fobi Mavis won the overall best female shot.

The overall team went to the Second Infantry Battalion.