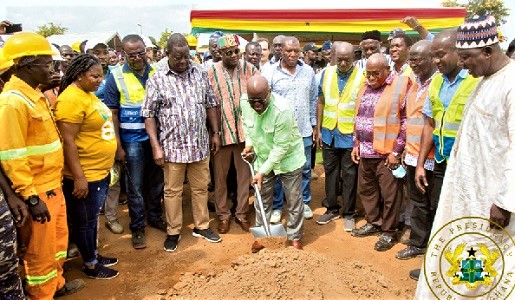 President Nana Addo Dankwa Akufo-Addo has cut the sod for the commencement of construction works on the dualisation of Yendi Township roads in the Northern Region.

The 2.53-kilometre road forms part of Lot Five and Six of the Eastern Corridor Road Project which stretches from Oti Damanko through Gbintiri to Yendi.

It involves the construction of a dual carriageway with median and sidewalks on each side of the road, three roundabouts and drainage systems.

To be constructed by Construtora Andrande Gutierrez, a Brazilian construction firm, the project is expected to be completed and open to traffic in seven months.

Cutting the sod yesterday to commence work on the project in Yendi, President Akufo-Addo said the project was in line with the government’s agenda to provide good and quality road infrastructure to accelerate the socio-economic development of the country.

He highlighted some of the major road sector projects undertaken by his administration to facilitate transportation in the region.

They included the construction of the Tamale-Yendi-Tatale stretch road, Tamale Interchange and a number of roads that have been completed.

While asking the contractor to complete the project on schedule, President Akufo-Addo urged the Ministry of Roads and Highways to put in place the necessary traffic management measures to reduce any inconvenience to the public during the construction period.

The Member of Parliament for Yendi, Farouk Aliu Mahama, lauded the government for the dualisation of the road, saying it would go a long way to open up the area.

“The ground-breaking project fits well into my vision of building a new city in Yendi — one that renews the hope of the majority of the people with full anticipation of a better life for all,” he said.

Earlier, the President paid a courtesy call on the Overlord of Dagbon, Ya-Na Abukari II, at the Gbewa Palace in Yendi.
Ya-Na lauded the government for working on the road network in the area which had been a major issue of concern to the people for the past years.

As part of the tour, the President also inspected ongoing works on the agenda 111 project at Saboba.

The President has been touring the northern part of Ghana to inspect ongoing projects and inaugurate completed ones.

The tour took him to the Upper East and North East regions before he arrived in the Northern Region.

The President said the persistent violence and killings in the Bawku traditional area were unacceptable and must end.

“Mahami was very instrumental among the three eminent chiefs in bringing us to have peace in Dagbon and I know he is also going to be instrumental in making sure that we get peace in Bawku,” President Akufo-Addo stated.