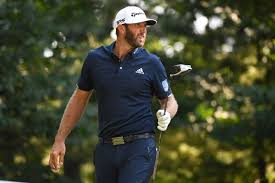 American Dustin Johnson is determined to hold on to the world number one spot for as long as possible after going back on top of the rankings with an 11-shot victory at the Northern Trust.

The 36-year-old, tied second at the US PGA in August, made six birdies and an eagle on his way to a 63 at TPC Boston.

Johnson, who last held top spot in May 2019, is the fifth men’s player to be ranked number one this year.

“I’d like to stay there for a little while,” Johnson said.

“Obviously it’s been jumping around a bunch here the last few months, but the last time I was number one, I think I stayed there for quite some time, and that’s another goal of mine… to see how long I can stay at number one.”

England’s Justin Rose and Tyrrell Hatton finished on 11 under with Ian Poulter two shots further behind and Tommy Fleetwood finishing on eight under.

Tiger Woods, winner of 15 majors, bounced back from his two-over 73 on Saturday with a five-under 66 for six under overall, while Northern Ireland’s Rory McIlroy shot a 69 to finish two under.

Johnson did not quite reach the heights of his Friday 60, but his unblemished final round featured an eagle on the par-five second before he reeled off another four birdies on the front nine to move further away from English.

He picked up another shot on the 12th and then, after an hour-long weather delay, rounded off his inevitable victory with a birdie at the last.

This was the first of three events in the US circuit’s FedEx Cup play-offs that will determine the PGA Tour champion for this season.

The top 70 players in season points will advance to next week’s BMW Championship, which will decide the 30 players to compete in next month’s season-ending Tour Championship at East Lake in Atlanta.

Johnson said he was determined to finish as the season’s champion for the first time in his career.

“It’s something I’ve been close to winning a few times, and it’s just something that I would really like to have on my resume when I’m done playing golf,” he added.