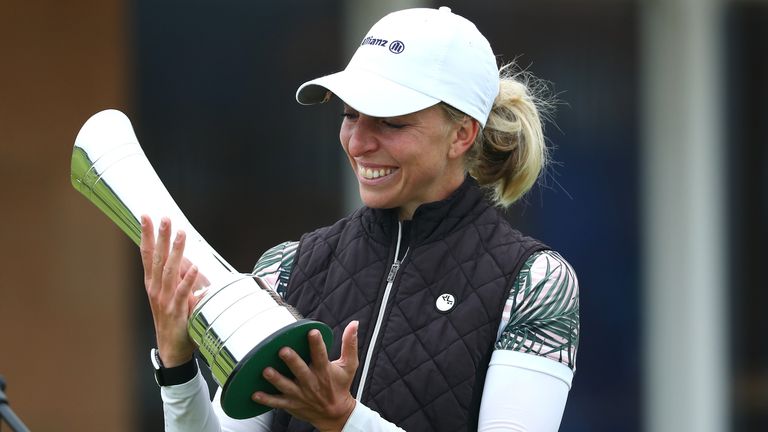 No-one flukes a victory over 72 holes and golf’s capacity to throw up unexpected winners is one of its greatest strengths and a dependable source of sporting inspiration.

Sophia Popov is living proof after seizing the AIG Women’s Open at Royal Troon on Sunday. Her triumph could not have been anticipated and nor could the overall success of the event in such troubled times.

During pre-tournament conversations the 27-year-old German was never mentioned, but she ultimately proved she belongs among the world’s best players.

Ranked 304 in the world, confined to the game’s satellite tours, scrapping to return to the LPGA, Popov provided a true sporting fairytale and deserves every ounce of the glory in which she now basks.

which had previously held back her career. Overcoming such a debilitating condition meant dealing with Ayrshire’s hostile elements was a relative breeze.

Golf is a sport with so many variables, especially in the sort of week that unfolded on this glorious links on the west coast of Scotland. Gale force winds and squally, sometimes torrential, showers scattered the field asunder over the first two days.

Popov was resolute throughout. When the weather eased it became a challenge to manage emotions and channel hard-earned skills to land a prize that not even she could have anticipated.

“It’s been something I couldn’t have dreamed of just a week ago,” Popov admitted. “And it’s incredible that golf allows for these things to happen.”

Popov also revealed she nearly gave up playing only last year. Her perseverance has been royally rewarded.

“I think the difference between two players any given week is never that big, but it might be 15 to 20 shots that week,” she said.

“But really, the ability of the player is not that far apart, and the hard work they put in is the same. I think it is nice that every player, every week, gets an opportunity to win.”

Popov recognised that she was one of 144 players who had a chance to triumph. “I had the week of my life,” she said.

“I have been playing really good golf, but yes, in the conditions, it was probably the best golf I’ve ever played. So I’m just incredibly thankful for the sport and anyone involved in giving us an opportunity to play.”

As Dame Laura Davies, who kick-started a remarkable week by hitting the first tee shot in her 40th Women’s Open on Thursday, said: “She’s answered all the questions.”

A year ago Popov missed out on returning to the LPGA Tour by a single stroke at qualifying school. She came to Troon with no status on the prime women’s circuit but she did win three times on the satellite Cactus Tour in Arizona.

One of them came at Troon North in Scottsdale, what an omen for a major week at Royal Troon. When women’s golf returned after a five-month coronavirus hiatus she came straight back to the LPGA, but as caddie to her friend Anne van Dam.

Popov then managed to get a start in the Marathon Classic in Toledo because so few players were prepared to travel to the event. She tied for ninth, earning her pace in the year’s first major.

Now her future on the LPGA Tour is secure, she will be a fixture in future majors and she knows that her performance can serve as an inspiration for countless other pros as they seek similar breakthroughs.

“I have a great group of friends, also, on the Symetra Tour, and on every tour level,” Popov said.

“I say, honestly, anyone at any given time, you just keep your head in it, and you work hard, and you can make it, because essentially, you’ve had the scores that I’ve had.”

This message was massively endorsed by her gloriously composed victory. “Of course there’s an elite amount of players that are always there,” she said.

“They are always in contention and they are always playing well. But there’s so many other players out there that can make it in any given week and I want them to know that and have the confidence that they can do it, too.”

Popov’s feel-good success mirrored the entire week. Yes, the fans were missed but the staging of this event was an otherwise unadulterated success.

Fears over the blight of slow play were unfounded, the course was set up superbly and sympathetically given the brutal weather conditions. Remarkably, the championship was completed without interruption.

The Women’s Open lived up to its billing as the biggest women’s sporting event of the year in Britain, the only golf major on these shores in 2020.

Popov’s extraordinary triumph against the odds gave it the most fitting of conclusions.