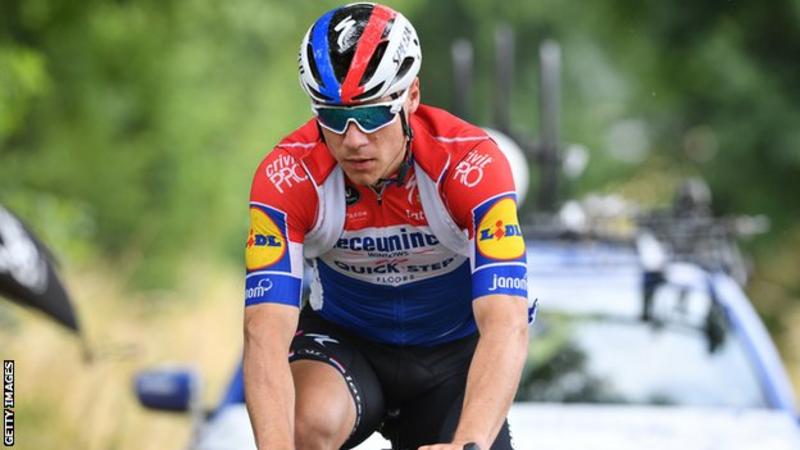 Fabio Jakobsen will require “multiple facial surgeries” after his crash at the Tour of Poland, but says he is “glad to be alive”.

The Deceuninck Quick Step rider was involved in a horrifying crash during a sprint finish two weeks ago.

He was pitched through a barrier and into spectators following a tangle with Jumbo-Visma’s Dylan Groenewegen.

The 23-year-old was taken to hospital where surgeons operated for five hours to give him “a chance to live”.

“It was a difficult, dark period for me in the ICU, where I was afraid of not surviving,” added Jakobsen in a statement released by his team.

“Thanks in part to the organisation behind the Tour de Pologne and my team, my family was able to be close to me, which gave me a lot of strength.”

Jakobsen’s Dutch compatriot Groenewegen, who caused the crash, was suspended by his Jumbo-Visma team pending the outcome of a disciplinary by the UCI, cycling’s governing body.

Groenewegen, 27, apologised for the crash on 5 August, and was visibly upset when discussing the incident in an interview.

Jakobsen, who was in an induced coma and spent a week in intensive care, added: “The trauma doctors and nurses at the finish line in Katowice saved my life, for which I am extremely grateful to them. They operated on me for five hours and gave me the chance to live. I am very grateful.

“Currently I am at home, where the wounds in my face and my injuries can continue to recover. In addition, I have to rest a lot in the coming months because of a severe concussion.

“In the coming weeks and months, I will undergo multiple surgeries and treatments to fix facial injuries.”

The crash caused an outcry within the sport and among fans about the safety of the race and the conduct of Groenewegen’s tactics.

Quick Step team boss Patrick Lefevere even called for Groenewegen to be jailed after the crash and promised to pursue the issue legally.

Fellow riders have questioned the organisers of the event for having the sprint finish into Katowice in southern Poland on a downhill section of road, where an exposed railway track sat behind the barriers.

Groenewegen used a common, if ethically questionable, lean towards Jakobsen in the final metres of the sprint, to deter him from passing him as the space between Groenewegen and the barrier reduced.

The barriers quickly came apart as Jakobsen made contact with them, causing him to strike a stanchion and a race organiser, who was also treated in hospital for head and spinal injuries.

The 20-year-old was part of a leading group who were descending the Colma di Sormano – the highest climb on the race.

He was lying around fourth in the group when he struck the wall of a bridge before somersaulting on to his back and over the edge.

On Tuesday Evenepoel said in a statement from his hospital bed that his “season is over so far, but there is plenty of time to plan a good comeback”.

Before his crash Evenepoel had won the Tour of Poland himself, paying tribute to his team-mate as he crossed the line.https://platform.twitter.com/embed/index.html?dnt=false&embedId=twitter-widget-0&frame=false&hideCard=false&hideThread=false&id=1295412743097454594&lang=en-gb&origin=https%3A%2F%2Fwww.bbc.co.uk%2Fsport%2Fcycling%2F53801531&theme=light&widgetsVersion=223fc1c4%3A1596143124634&width=550pxReport