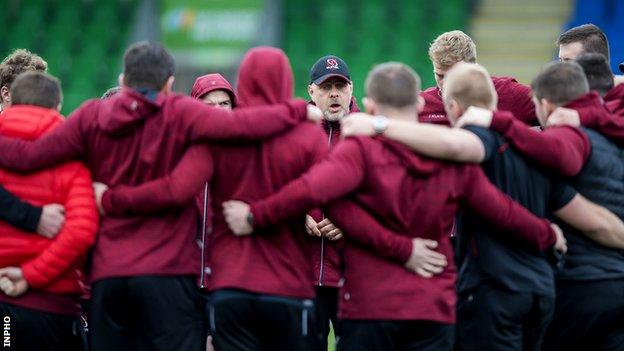 Even the truest of cynics would struggle to argue that stage one of Dan McFarland’s reign as Ulster head coach was not a success.

Central to such an argument would probably be the lack of trophy or final to date, but it would probably also come from someone who was ignorant, perhaps wilfully, to the dire straits Ulster were in before the arrival of McFarland and chief executive Jonny Petrie.

No, any way you slice it, Ulster are in an immeasurably better position now than they were at the end of the 2017-18 season.

There is a lot of credit to go around from the CEO to the coaching staff and indeed the players, whose win in the seventh place play-off at the end of that horrendous season is arguably the most underrated in recent memory, in terms of its significance going forward.

McFarland and Petrie’s first task was to reinvigorate a club that was going backwards on and off the pitch and put them back in the frame to compete in big, knockout games. Stage one complete.

Now it is time for stage two: Not just getting to the big dances, but taking home the prize.

Last week in the build-up to their meeting with Leinster, Jacob Stockdale was asked about Ulster’s narrow European defeat by their provincial rivals last season in which Ulster ran their southern neighbours much closer than most thought they would.

Stockdale was not up for romanticising that defeat which after all was still, in the end, a defeat. The Ireland international pointed out that squad has changed since then and that all the lessons to be taken from that game had, by now, been ingested.

Ulster’s recent record in knockout competitions is poor. They last reached a final in 2013, when they made it to the Pro12 showpiece before falling to Leinster.

Since then they have played seven knockout matches and won only one, against Connacht in last season’s Pro14 quarter-final.

This year, as they did last season, they have made it through the group stages to the business end of both competitions but now face tricky away ties.

Their cause this year is undoubtedly aided by the absence of fans, which will go some way to nullifying their away disadvantage particularly, one suspects, when they meet Toulouse in their European quarter-final later this month.

What will constitute a successful season is open to interpretation, some will argue that only silverware will suffice but in terms of a tangible improvement on what has gone before, making it to the Pro14 final would be another step forward in the evolution of McFarland’s Ulster.

Province must up their game for semi-final

Ulster will be relieved that their semi-final place was secured before they returned to action following the six-month break.

Over two weeks of inter-provincial derbies it was Ulster who looked by far the most sluggish of the Irish sides.

Against Connacht and Leinster they were slow out of the box and never recovered in either contest having coughed up early points. In both instances they improved after half-time but were always chasing the game.

Neither result, as McFarland acknowledged, was catastrophic but the chance to ride into the semi-finals on a wave of momentum was passed up.

Instead Ulster go to Murrayfield knowing they must find an extra gear that has been lacking in recent weeks, and that they cannot afford a third straight poor start.

This week McFarland harked back to last year’s semi-final, when Ulster’s campaign was brought to an abrupt end as they suffered a 50-20 thrashing at the hands of Glasgow.

For the most part that loss was contextualised as a defeat that served as a reminder of work still to be done after what was a generally uplifting season for the province.

One suspects that a similar defeat on Saturday may not be met with the same magnanimity.

Athletes and fans are conditioned to always want something more, regardless of how high they have climbed to get to that point in the first place.

Ulster have enjoyed an undeniable renaissance under McFarland which has stoked a fire under their fanbase and their prospects, but in professional sport there is little tolerance for standing still.

Booking a place in the Pro14 final would be an indisputable sign that stage two of McFarland’s time at Ulster is underway.