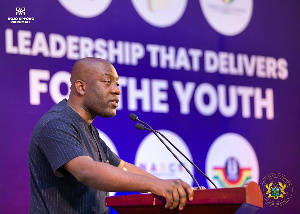 Information Minister has described an infrastructure plan of the opposition National Democratic Congress (NDC), the ‘Big Push’ as one that lacks credibility.

According to Kojo Oppong Nkrumah, the NDC government, who in 2012 proposed a similar infrastructure plan, the ‘Hope City Project’ cannot be trusted to deliver due to the project barely executed during its tenure.

Speaking on Joy News’ PM Express segment on Wednesday, September 23, 2020, the Information Minister said, “To simply put, the first time they [NDC] talked about a US$10 billion infrastructure programme aimed at delivering any sort of benefit Ghanaians was during the era of Mr Mahama when they sold us the idea of the Hope City.”

“It may sound like a funny subject but that was the first time they sold us a US$10 billion infrastructure programme – a public private partnership when Mr Mahama came to cut sod around Weija explaining to us how it was going to be self-financing, they were going to build this infrastructure, it was going to lead to technology and jobs etc. And by the time they were leaving power, beyond the sod-cutting, not much had happened.”

The Information Minister added, “If there is somebody to recover this economy, it’s not our colleagues [NDC) on the other side. And you’ve seen how even their big push my good friend is struggling to explain how they intend to go about this Big Push argument,” he further indicated.

Flagbearer of the NDC, John Dramani Mahama had in his 2020 manifesto announced plans to implement the ‘Big Push’ initiative should his party be given the nod in the upcoming December 2020 elections.

The ‘Big Push’ infrastructural initiative which will earmark some US$10 billion seeks to create about one million jobs and employ some 250,000 Ghanaians within four years.

The initiative would see the injection of the funds into infrastructural development to boost the construction and engineering sectors as well as other professionals and artisans.