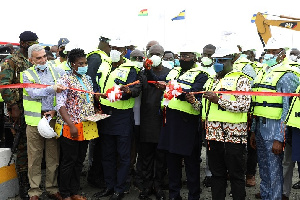 The Vice President of the Republic, His Excellency Dr. Mahamudu Bawumia has
commissioned a new liquid bulk terminal at the Port of Takoradi which would be responsible for receiving bulk liquid cargo such as petrol, diesel, LPG, heavy fuel and bitumen.

The new state of the art liquid bulk terminal which cost about USD 56.7M was built, and would be operated and managed by Marshall Oil and Gas Services, a subsidiary of the IbisTek Group of Companies, who are playing a major role in infrastructural developments at the Port of Takoradi.

It consists of a -14m chart datum, 5 loading arms for the various petroleum products which are petrol, diesel, LPG, heavy fuel and bitumen. It has a berthing capacity to handle vessels up to 60,000 tonnes of petroleum cargo.
The Chairman of the IbisTek Group, Kwame Gyan, expressed gratitude to the Ghana Ports and Harbours Authority and its local financial partners for the faith shown in the indigenous business entity towards contributing to Ghana’s port infrastructural development.

“IbisTek is very grateful to the management and staff of GPHA for their tremendous support and collaboration. Minus GPHA, there wouldn’t be any IbisTek involvement in the Port of Takoradi,” he expressed.

The Chairman of the Board of Directors of the Ghana Ports and Harbours Authority, Peter Mac Manu said the terminal is positioned to meet more than 50% of Ghana’s domestic petroleum consumption and it would also bring about many employment avenues.

“The terminal is also expected to employ a regular 100 import specialist personnel, and more than 500 indirect persons to operate the facility,” he indicated.

The Minister of Transport, Kwaku Ofori Asiamah said, Government’s resilience to support IbisTek to develop its various infrastructural developments at the Port of Takoradi is a demonstration of the commitment to boosting the capacity of the Ghanaian private sector in meeting capital intensive industrialization objectives.

“We have made significant progress towards the provision of necessary facilities to meet the demands of our oil and gas industry, increase commercial trade and also to improve the competitiveness of the port to other neighbouring countries,” he added.

The Vice President, Dr. Mahamudu Bawumia stated that the Liquid Bulk Terminal project ties in with government’s vision towards ensuring efficiency in the country’s port operations which would go a long way to position the country as a major petroleum hub in the sub-region.

“When you look at what they are doing in the context of the expansion of the Takoradi Port, it all comes together in making this port a major petroleum hub in the sub-region,”

He commended Ibistek Group, for a timely delivery of the project which he has taken particular interest in, due to the vision the IbisTek Group presented to the Presidency.