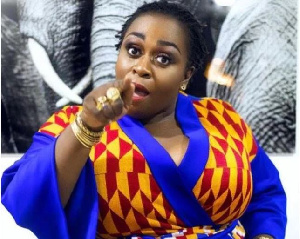 Deputy Communications Director of NPP, Mame Yaa Aboagye has expressed shock at the conduct of the NDC’s Flagbearer, John Dramani Mahama over his latest comment on the December 7 elections.

According to her, Mahama’s ranting over the new voters’ register is a sign that he has foreseen losing the elections.

Mame Yaa’s comments come after the flagbearer of the NDC, John Dramani Mahama, during the week announced that the party would not accept any flawed results in the elections.

Mahama, speaking at a press conference on the integrity of the provisional voters’ register, insisted on looking forward to free, fair, and flawless elections, hence the party would not look on either would it ignore its civil responsibilities.

“We won’t allow the EC whether by ill intents or a sheer incompetence till you serve the people’s mandate in the 7th December election”, he said.

But reacting to the former President and NDC flagbearer’s comments, Mame Yaa said “the tremendous development projects being undertaken by the governing NPP, coupled with a large number of supporters is a clear indication to the NDC and John Mahama that they have already lost the 2020 elections, hence his constant negative messages on election 2020”.

She added that “the NPP is a party that develops and raises the living standards of the people as compared to the NDC…The NDC never believed President Akufo-Addo was going to fulfill his promises.”

She further said government’s development interventions including the Free Senior High School, One District; One Factory, One Village; One Dam, Planting for Food and Jobs, Nation’s Builders Corps (NABCO) among others has dazed John Mahama and the NDC hence their negative comments.

“Mahama’s desperation defies logic. They are only making unnecessary noises,” she stressed.

She, therefore, urged Ghanaians to rally behind the President for more development projects.

NPP needs to rule for many years – Freddie Blay