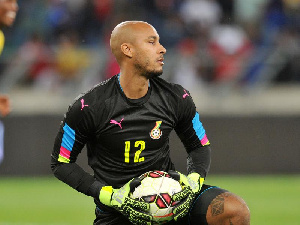 Black Stars goalkeeper, Adam Larsen Kwarasey has revealed that helping the country to qualify for the Nations Cup in Gabon-Equatorial Guinea was the highest point of his international career.

The Norwegian born goalkeeper played a crucial role in Ghana’s qualification and was the number one shot-stopper at the tournament in 2012.

Kwarasey also highlighted his inclusion at the FIFA World Cup in Brazil 2014 as a significant mark in his career.

“When we qualified for the Nations Cup in Gabon and Equatorial Guinea; that was a special feeling. Qualifying for a big tournament and being able to contribute in the qualifiers was nice,” he told Citi Sports.

“And when we qualified for the World Cup in Brazil, I didn’t play the game against Egypt in Egypt as I was on the bench but that doesn’t matter for me because it’s not about me it’s about us doing it as a team for the country,” he added.

Ghana finished fourth at the tournament after losing to Mali in the third and fourth play-off game.