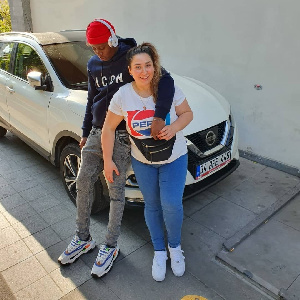 Just three days after wishing musician Patapaa a Happy Boyfriends Day, Liha Miller, girlfriend of the Ghanaian hiplife act is causing a stir as she has flooded her Instagram page with numerous photos of another guy.

Despite having clarified in some of her posts that the “new” guy is actually her friend, some of her followers and loyal fans of Patapaa are questioning the status of Patapaa and Liha with a new man in the picture.

“Hmmmmm is pa to pa soja happy?” was the question Peterson_igp posed under one of the posts Liha shared with her friend.

Another user, Angeedzikunu warned of insecurity by saying “You r (are) going to make patapeezy jealous o. stop iiit.”
However, in one of her latest posts, Liha has shared a video of Patapaa dancing with his Pa to Pa soldiers and referred to the one corner hitmaker as her baby, quelling any hint of a possible breakup.