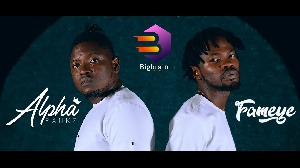 The song title meaning ‘Half-Caste’ talks about the singer’s love for a certain woman as he promises to give her a lavish lifestyle. He goes on to add that the world would hear of and see their journey of love.

Fameye on his part delivered his signature silky vocals to the hiplife record which is already considered as a potential ht.

Alpha Bankz has also premiered a well-directed video for the song.

‘TumTum Broni’ is already enjoying airplay on radio and television in the capital Accra.

The song is currently available on all digital streaming and sales platforms.

Patapaa’s girlfriend causes stir by sharing photo with another man