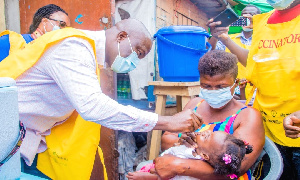 Dr Senanu Kwesi Dzokoto, Deputy Volta Regional Director of Health, in charge of Public Health, has said that round two of phase three of the ongoing polio immunisation campaign would take place between October 8 and 11, 2020.

He said the objective of the exercise was to stop transmission of the wild polio virus that had been detected and to prevent its outbreak in parts of the country that had not recorded it.

The Deputy Director said the exercise would take place in Volta, Ashanti, Central, Eastern, Greater Accra, Upper West, Western and Western North regions, where the first round was conducted and over four and a half million children who were less than five years were targeted to be vaccinated.

Mr Dzokoto, who was speaking at a press briefing in Ho, said children could only be protected against the potentially debilitating effects of poliomyelitis if only they were dosed, adding that “additional doses are not harmful; it is rather beneficial to the entire population.”

He said Oral Polio Vaccine (OPV) was safe and effective at protecting children against lifelong polio paralysis, adding that children who were vaccinated during the first round of the campaign and those who missed it were all eligible to take part in the second round.

“In order for our children to develop immunity against all types of polio virus there is the need to organize two to three rounds of supplementary immunization activities in addition to the scheduled routine immunization being utilized by all our children,” he said.

Dr Dzokoto said the polio campaign involved extensive mobilisation of both human and material resources and largely depended on the cooperation of mothers and caregivers and therefore called on parents to make their children available for the exercise to prevent the poliovirus.

The Deputy Director described the first round of the Polio campaign, which was conducted between September 10 and 13, 2020, as successful since the majority of the targeted children were vaccinated.

“The results of the Lots Quality Assurance Sample Survey and the end process independent monitoring indicate that they did not come across any unimmunized child in 13 out of the 18 districts. Although it is not the hundred percent performance that we expected, it is nonetheless a commendable feat we can build on,” he stated.

Dr Dzokoto said though polio affected both children and adults, however, children under five years of age were most at risk, adding that “as long as a single child remains infected, children in all countries are at risk of contracting polio”.

He said measures were put in place to ensure that teams that would be dispatched to undertake the exercise observe the Covid-19 preventive protocols to stem the spread of the disease.

Mr Anthony Mawuli Pani, Regional Disease Control Officer, said Vitamin A supplementation would be integrated in the second round of the polio campaign and would be given to children between six months and five years to boost their immune system.

He said all logistics needed for the campaign had been secured and officers were also adequately trained and called for support from all for smooth and successful exercise.

Mr Pani commended the media for their unflinching support during the first round of the campaign and urged them to show the same during this second round, so that the desired objective would be achieved.