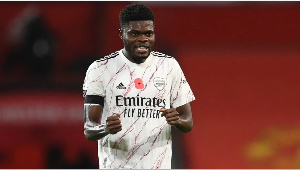 It was a midfield masterclass that validated Arsenal’s decision to pay £45.3million to Atletico Madrid and also offer him a $260,000 weekly salary.

Alongside his Egyptian partner Mohammed Elneny, Thomas Partey produced a performance of a lifetime.

Every move he made smacked of class and set him apart from Manchester United’s midfield trio of Pogba, Fernandez and McTominay.

After their sterling performance against RB Leipzig in the UEFA Champions League, it was expected that the three midfielders will run riot over Arsenal but at the end of the day it was Partey who stole the show and won a deserving Man of the Match award.

He dribbled, intercepted and initiated attacks as he bullied the United midfield and gave Arsenal the bite they’ve lacked in the middle of the park for ages.

So good he was that Manchester United legend Roy Keane wished he was playing for them and not Arsenal.

In one instance that captured exactly what he was about, Partey recovered the ball from Paul Pogba, lost it to him, and won it back in less than 12 seconds.

While Elneny covered every grass on the pitch, Partey sublimely dictated the game and was at the center of every good thing that Arsenal did in the game.

Pierre-Emerick Aubameyang’s 69th-minute penalty proved the difference as Arsenal ended a 14-year winless run at Old Trafford but it’s Partey who partied on the pitch.

His performance, compared to Paul Pogba is succinctly captured in this statement by renowned commentator Peter Drury.

Peter Drury: “Right there you have two midfielders battling it out for glory and stardom, you look at Thomas and you can see he’s really ready to Party But you look at Paul and it seems he’s here to sweep after the party is over”.

Watch Partey’s incredible performance in the video below

Round two of polio immunization campaign to commence on October 8